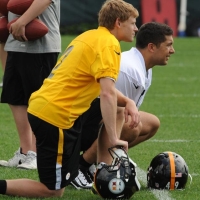 The Pittsburgh Steelers seemingly made it a point of emphasis to draft players this year to address areas of need at certain positions: David DeCastro and Mike Adams at guard and tackle, respectively, Sean Spence at inside linebacker, Alameda Ta’amu at nose tackle, and Chris Rainey at running back. One position that was not addressed in the draft, and was not expected to be, was kicker.

While Shaun Suisham is not dreadful, his performance during his tenure with the Steelers is not exactly awe-inspiring and reliable. In his two seasons with Pittsburgh, Suisham has made 37 of 46 field goals, which is good for 80%. This is closely aligned with his career average of 79.5%, which could be indicative that he has hit his ceiling and will not improve beyond what he has already shown. Having spent time with the Dallas Cowboys, San Francisco 49ers, and Washington Redskins, Suisham will begin his seventh year in the league in 2012 as an average field goal kicker who missed what could have been game changing kicks in Super Bowl XLV against the Green Bay Packers and in 2011 against the Baltimore Ravens in Pittsburgh. He is also a player that Head Coach Mike Tomlin did not trust in that second Steelers/Ravens game to attempt a 48 yard field goal to give the Steelers a seven point lead. In other words, Suisham is a player whose tenure with the team should be under intense scrutiny heading into training camp this coming summer.

No, I am not making the Lassie call for Jeff Reed here, so leave your paper towel dispensers intact.

However, what I am lobbying for is the serious consideration of rookie free agent kicker, Grant Ressel. Ressel is a 6’2, 190 pound kicker who grew up in Jackson, Missouri and attended the University of Missouri. Ressel walked on and earned the starting placekicker position in 2009, a year in which he earned First Team All-American honors through his performance, nailing 26 of 27 field goals, which when combined with his 39 of 39 extra points resulted in the highest combined kick accuracy in NCAA history (98.5%). His only miss during the season came in horrible weather conditions against Nebraska. Ressel followed 2009 with another great performance in 2010 as he made 17 of 19 field goals and went 45 of 47 on extra points (EP misses that were attributed to high snaps).

In his senior season, Ressel hit only on 9 of 16 (56%) field goals and was 30 for 30 on extra points. His misses garnered some buzz in the Mizzou media about his confidence, and unfortunately, a hip flexor injury sidelined him for the rest of the year following a contest against Oklahoma State in which Ressel would make the final field goal of his collegiate career, a 26 yarder.

The ultimate question now is who is the true Grant Ressel? The impeccable one from 2009 and 2010, or the spotty, injury-hampered Missourian from 2011?

In 2002 when the Steelers were suffering at the foot of kicker Todd Peterson, the infamous Reed was brought in for a tryout midseason as a kicker from North Carolina who connected on only 77% of his field goals in college and never hit anything longer than 49 yards. So why not give Ressel an extended, analytical look? His field goal percentage in college was seven percent higher than Reed’s in college (84%), plus he did connect on a 50-yard field goal (Ressel also averaged 64 yards on his kickoffs).

While “Sushi” is not the worst, he is not the best, and he will not be the best any time soon. Like in 2002 with Reed, it may serve the Steelers well to take a chance on a rookie free agent who has shown that he is capable of kicking excellence.

If the real Missouri kicker is the one from 2009 and 2010, I’m going to put my faith in him to “Ressel” the job away from the Suisham this August.