Interestingly enough, news  outlets don\’t usually share a ton of information about professional  football teams in the NFL during the month of May.  That is, they don\’t talk about much more than signings and OTAs.  For this week\’s \’Steelers Rewind\’ article, we\’ll take a look at different \’organized team activities\’ stories and how they affected the history of the organization.

To show or not show – an OTA question 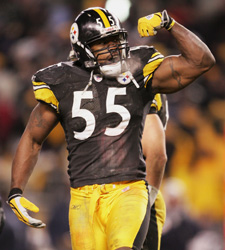 Joey Porter experienced what many veterans have in the month of May (2006); an inability to participate due to injury.  After leading all NFL linebackers in sacks during the Steelers\’ 2005 Super Bowl season, Porter underwent arthroscopic knee surgery and off-season conditioning programs.  Porter was a third-round draftee in 1999 (out of Colorado State) and started since his second season in the league.  By 2005, he had 436 career tackles, eight interceptions, 29 pass-defenses, 17 forced fumbles and eight recoveries.  He had also been a three-time Pro Bowl performer.

It will be interesting to see just who does and does not participate in 2012.

One veteran that frequently misses OTAs with the Steelers is Troy Polamalu.  Many times Polamalu has skipped the non-mandatory practices in favor of training near his home in California.  Polamalu was able to play 16 regular season games in 2011 after missing a ton of time in 2009 and 2010.  Sources said he would be at the OTAs this season and he was.

Porter was suspected of missing OTA workouts because he wanted to address contract issues.  In 2006, Porter still had two seasons on his contract, and the Steelers traditionally don\’t extend player contracts until they have a single season remaining.

There is no suspicion on Polamalu.  In September 2011, Polamalu extended his career with the Steelers by signing a new contract through the 2014 season.

We can pretty much count on the fact that Max Starks will not attend the upcoming OTAs due to the fact that his own ACL injury will most likely not be completely healed until July.  So far Starks hasn\’t received a call from the Steelers to return to the team (he is a free agent who could be signed if healthy by training camp in July, which looks unlikely).

Wide receiver Mike Wallace, who has yet to sign the one-year tender offered to him by the team and will not do so before the OTAs, making it unlikely that, unless something drastically changes, Wallace will participate in 2012 offseason programs.

Rookie draft picks David DeCastro and tackle Mike Adams aren\’t allowed to participate in the OTAs due to the fact that the semesters at their colleges haven\’t ended.  Adams attended Ohio State and DeCastro attended Stanford.

In 2009, Santonio Holmes missed the first OTA and Lawrence Timmons made his first.

In a strange set of events, the Steelers organization was expected by the Internal Revenue Service to pay taxes on their 1979 and 1980 Super Bowl rings.  Considered to be income, many felt the IRS had overstepped its boundaries.  Steelers officials, at the time, said that the IRS could only tax the rings from those two years due to the fact that the statue of limitations had run out on their 1975 and 1976 rings.  Did the IRS actually accomplish their taxing task?  While that could not be determined in any research I conducted, Rocky Bleier and several other NFL players have had to sell their rings in order to pay taxes to the IRS.

As for Pete Harris – he was the brother of Steelers running back Franco Harris.  Pete played at Penn State, but went undrafted.  He came to practices with the Steelers in 1982 after two years of waiting for someone to call.  Pete told the press, “When my brother called and told me to come down, I took a one-day crash course in getting ready.”  Unfortunately, the Steelers never had Pete play for them; thus, no Harris brothers on their roster.

Pete Harris was an All-American at Penn State and played for the Nittany Lions in 1977, 1978 and 1980.  A safety, Harris led the nation his junior year with ten interceptions for 155 yards.