With everyone getting excited about how the Pittsburgh Steelers are going to look during the 2012 season, it\’s easy to see why trades, transactions, OTAs and mini-camps draw fan attention.  In this edition of \’Steelers Rewind\’, we\’ll take a look at some history from late May and early June that includes tales related to these topics.

May 31, 1995 – Barry Foster traded to Carolina Panthers in expansion move 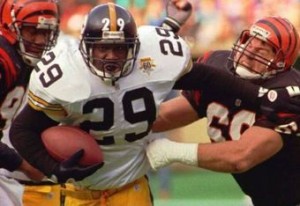 Steelers coach Chuck Noll drafted the 5\’10”, 223 pound Arkansas running back in 1990.  Barry Foster was the 19th pick in the fifth round of that year\’s NFL draft.  Meant to bolster the Steelers running game as a dual-threat at running back and as a special teams returner, Foster saw limited time, getting a mere 36 touches from scrimmage and returning three kicks.

Foster was limited in 1991 due to an ankle injury but was moved to running back exclusively.

When Bill Cowher took over at head coach in 1992, he revamped the offense around a Foster who was 100 percent.  Foster had his best season that year, starting fifteen out of sixteen games.  He carried the ball 390 times from scrimmage for an AFC-leading 1,690 yards and beat the Steelers\’ team record for rushing-yards-per-season, formerly held by Franco Harris.  Foster\’s record still remains to this day.

1993 and 1994 saw Foster with more injuries and less playing time.  With Bam Morris charging up the depth chart as he fell, and the Steelers picking up Eric Pegram, Foster\’s value diminished.

The Steelers were dealing with a large contract and a player who could no longer be valued on the field.  After \’shopping him around\’ to other teams, Foster caught a break when the NFL expanded the league and gave Carolina a team (the Panthers).  The Panthers were excited to get a back who could aid quarterbacks Kerry Collins and Frank Reich.  At the time, Panthers president Mike McCormack was quoted in the Victoria Advocate as saying, “Barry\’s a big back who can really pound it in there and get some yardage.  He can change the pace of a game.”

Unfortunately, Foster\’s last year in the NFL was 1995. 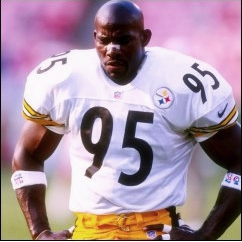 On June 3, 1998, Pittsburgh Post-Gazette writer Ed Bouchette noticed something that made big headlines; Greg Lloyd had lost a step.  In fact, Bouchette said that Lloyd looked like a “linebacker who won\’t play in the NFL again for a long time, if ever.”

The man who was known to wear a t-shirt that said, “I wasn\’t hired for my disposition” limped onto the practice field that day after nearly 7 months of off time.  He participated in every drill, but he wasn\’t the same man.  Lloyd had terrified quarterbacks for several years and had played in five Pro Bowls, but that day on the field he looked like his atrophied right leg would no longer be the same.

In November of 1997, Lloyd had such a severe case of Staph infection in that leg that a noticeable difference could be seen between his two calves.  According to reports, a member of the staff called the difference “scary”.

Head Coach Bill Cowher cautiously downplayed the reactions.  “He knows what he can do and can\’t do,” Cowher stated.  When asked about the condition of Lloyd\’s leg, Cowher said, “You saw it as well as I did.  He was out there, which is a good sign.”

The initial injury was a sprained right ankle.  After receiving an injection to help it heal, Lloyd\’s ankle was so swollen with infection that his agent said the linebacker nearly lost his life.  After losing around 20 pounds, it was unclear as to whether Lloyd would be able to play again, and Bouchette said it would take a miracle for him to come back.

The terrible decision for the Steelers was whether or not they would cut Lloyd and his $2.8 million salary, put him on the PUP list with a pay cut or new contract based around performance bonuses, or simply ask him to retire.

In the end, Lloyd too ended up with the Carolina Panthers.  He played one season with them before retiring.

Lloyd\’s legacy and tenacity did aid the Steelers in other ways.  Lloyd was known for guiding young linebackers Chad Brown and Jason Gildon as they began their own history with the organization. 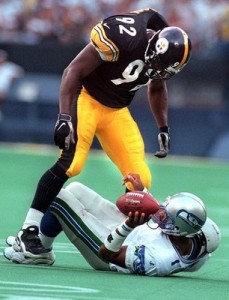 Jason Gildon was a third-round draft pick for the Steelers in 1994.  His first two seasons, he started a single game and was mainly relegated to special teams and recorded five sacks.  By 1996, Gildon was starting full time.  The Steelers\’ all-time sacks leader (77 in ten seasons) ended up caught in the dreaded salary-cap decisions all teams have to make.

In early June of 2004, the All-Pro linebacker was released to open up $3.65 million in salary cap room for the Steelers organization.  The Steelers were forced to count $1.3 million in deferred signing bonuses to Gildon against their 2004 cap and $2.6 million in 2005.

The 32-year-old Gildon was said to understand that his decade-long career with the Steelers was finished when the organization signed his backup, Clark Haggans, to a $10.2 million, four-year contract in March.

“It\’s part of the business, and I understand that,” Gildon said.  “But it\’s kind of disappointing because of how long I\’ve been here.”

After being released by the Steelers, Gildon signed with the Jacksonville Jaguars in the 7th week of the 2004 season, then retired after the season.

A mere day later, it was reported that former Steelers quarterback-slash-wide receiver Kordell Stewart had agreed to a one-year contract with the Baltimore Ravens by the Gettysburg Times.  General Manager Ozzie Newsome said of Stewart, “He will be here tomorrow and on the practice field…he wanted to be a Raven.”

Stewart was signed by the Ravens to back up starting quarterback Kyle Boller and replace injured Anthony Wright.  Prior to his signing, Stewart had been with the Chicago Bears for a single rocky season.  He was benched when rookie Rex Grossman took over.  In his first season with the Ravens, Stewart didn\’t throw a single pass but in an unexpected twist, became an emergency replacement for punter Dave Zastudil.   Released after the 2004 season, Stewart was brought back after the first week of the 2005 season when Boller was injured and Stewart backed up Wright.

When Boller was reactivated in November 2005,  Stewart was once again shown the door.

In an April 29, 2008 interview on WCNN 680 “The Fan”, Stewart expressed interest in returning to the National Football League and according to ESPN2\’s First Take (July 2008), he had not officially retired.  He entered free agency but was never selected by an NFL team. 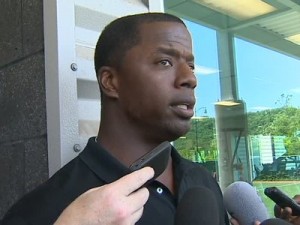 Oddly enough, after all these years, Stewart plans to sign a one-day contract and signal a finality to what he called an “ebb0and-flow-type career”  this week so that he could retire with the Steelers.