In part one of the \’draft edition\’ of our weekly series \’Steelers Rewind\’, we talked about some past players and their draft stories.  This week we\’ll cover some draft history of players still with the Steelers and some other relevant stories.  As always, we hope that these rewind articles help shed light on facts that even the most avid of fans may not have remembered. 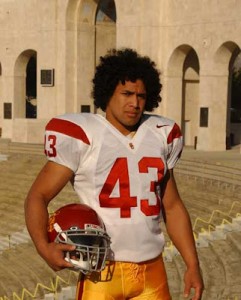 Everyone who hasn\’t been under a rock since the 2003 NFL Draft knows who Troy Polamalu is, and that he played safety at the University of Southern California (Trojans) where he was considered the best at that position to attend that college since Ronnie Lott.  At the time he was drafted, the Samoan wonder was a mere 22-years-of-age.  The big question many scouts had at the time was whether or not Polamalu\’s history of three concussions suffered in college ball would affect his longevity in the National Football League.

At the time, Polamalu said, “I go out there and sacrifice every piece of my body and my head has come out on the bad end a few times.  But it\’s never changed my style of play and never will because I love the sport.”

Although Kevin Colbert said that he felt Polamalu would “probably deliver a few more blows” than he\’d take, the Steelers initiated a program to protect Polamalu; the only safety drafted in the first round by the organization since Bill Cowher became head coach in 1992.

Polamalu was fitted with a special helmet to help deflect impacts, especially to the sides of his jaw.  It was a sign that the NFL and the Steelers organization were beginning to be serious about protecting their investments, namely players.  Polamalu told Sports Illustrated that players can “play without an arm, without a leg, but you can\’t play without your head.”  You have to read this as a non-literal statement.  Yes, players have proven that injured limbs can still allow them to play, but Polamalu\’s statement about head injuries is becoming even more glaringly obvious.

With the recent death of Junior Seau of an apparent self-inflicted gunshot and his closest friends and family asking if being hit so many times in the head led up to his life ending unexpectedly, Polamalu\’s statement hits very close to home.  Fellow Samoans, Seau and Polamalu knew each other on and off of the field.

I am deeply saddened by the events that have transpired today. My heartfelt condolences and sympathy go out to his family. Junior Seau meant so much to me and many other Samoan youth both as a player and person. Junior epitomized hard work and dedication to football and philanthropy. He was a childhood hero of mine and honored to say, a good friend. Junior Seau will always be someone I look up to and will walk the path he paved for me and many other (USC) Trojans, Samoans, and athletes alike.

Just as sad, a large group of former NFL players who are claiming that concussions have led to serious issues later in life, including drug usage and depression, lost 62-year-old Ray Easterling in April of this year.  Easterling played safety for the Atlanta Falcons from 1974-77 and died of a self-inflicted gunshot wound.

Thankfully, Polamalu has been a staple in the Steelers\’ defensive scheme for most of the past decade.  The fact that he understands the worth of his head shows just how smart of a player the Steelers selected in the 2003 draft. 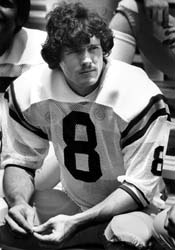 Did we catch you off guard?  The month of May was very different for two highly regarded Steelers players.  They played different positions, wore different numbers, went to different colleges, but both share the same last name.  That may mean very little, until you talk about the men themselves.

David Woodley was a quarterback out of Louisiana State, drafted in the eighth round (#214) of the 1980 NFL Draft by the Miami Dolphins who then came to Pittsburgh.  In Miami, Woodley was a bridge between the Bob Griese and Dan Marino eras.  Interestingly enough, Woodley set and still holds the Dolphins team record for most pass completions (176) for a rookie quarterback.  In 1982, Woodley helped the Dolphins to Super Bowl XVII and was the youngest Super Bowl starting quarterback in NFL history at that time.  After Marino took the QB position from him, Woodley found himself in Pittsburgh up for competing against Cliff Stoudt and Mark Malone).  Woodley split the starting duties with Malone during the 1984 and 1985 seasons with the Steelers.

In May of 1986, Woodley told Steelers head coach Chuck Noll that he wouldn\’t be attending mini-camp.  He was sitting atop the pay scale and would be the highest paid player on the roster at $500,000.  Instead, he walked away, tried camp with the Green Bay Packers the next season and then quit football.  Woodley joins only Ken Stabler with a career winning percentage above .600 while throwing at least ten more interceptions than touchdowns.  David Woodley passed away on May 4, 2003. 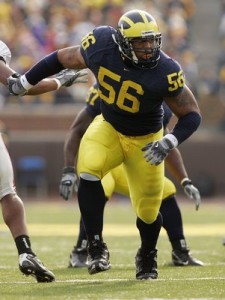 LaMarr Woodley was drafted by the Steelers in the second round of the 2007 NFL Draft.  A former University of Michigan (Wolverines) defensive end and linebacker, Woodley recorded his first sack in only his second professional game.  A football prodigy out of Saginaw, Michigan, Woodley quickly became the 3-4 outside linebacker that the Steelers wanted since they\’d seen Kevin Greene  and other big names at the position leave the team . Woodley was mentored by Clark Haggans and eventually replaced him on the roster.

Greene, who had 160 career sacks in his 15-year NFL career (more than any other linebacker) told the Pittsburgh Post-Gazette that good pass rushers have more than one move and can adapt mid-rush.  Woodley has been consistent in his game play, especially when hunting quarterbacks and adapting to offensive schemes.  Thus far in his career (as of the 2011 season), Woodley has 225 tackles, 48.0 sacks, four interceptions and seven forced fumbles.

In what could have been seen as a summer trend – holding out of training camp for a raise – in May of 2010, Woodley was at the Steelers\’ South Side training facility for optional team workouts.  Woodley told Pittsburgh Magazine, “If I miss workouts and training camp, I not only hurt myself, but I hurt the team.  I don\’t want to fall behind because I\’m worried about dollar signs.”

Woodley will be hosting a free football camp in Saginaw (Mich.) again this year.  Every year he has been doing the camps, an estimated 300 kids participate.

John Rienstra – Pressure in May 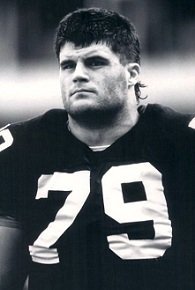 In 1986, the Steelers selected guard John Rienstra (Temple) in the first round of the NFL Draft.  In the May mini-camp, Rienstra injured his foot the very first day.  Offensive line coach Hal Hunter said, “The more time he misses, the more time he has to make up.  If this goes on too long, he\’s going to have to be Captain Marvel to catch up.”  The 1985 season was the worst since Chuck Noll\’s second as head coach.  Rienstra may have been a weight-room god, but he ended up being a training camp holdout.

Hunter thought that Rienstra would be the next John Hannah (New England Patriots\’ Hall-of-Fame guard).  Noll saw his 24-day holdout and broken foot as a wasted draft pick.

Rienstra admitted, looking back, that being selected in the first round was pressure that he wasn\’t prepared for.  He also didn\’t expect Noll to deactivate him for most of the 1990 season – a mere year after Rienstra had played his best professional football.  Tom Donohoe agreed with Rienstra\’s thoughts, and said, “I was a regional scout with Blesto the year that John was drafted… I saw him as a third or fourth round pick; a place where he might have gone to camp and have been given time to adjust before he was asked to produce.”

Over five seasons, Rienstra started only 27 games (played in 42).  He suffered from ulcers, vomiting before games, a broken foot, broken ribs, a sprained ankle, a knee injury, a stress fracture and a stress disorder that ultimately forced him to walk away from training camp in 1988 to seek counseling and paint houses instead of playing football.  When he returned in 1989, he had the best season of his life.

After being benched in \’90,  Rienstra found that with his injured back, the death of his father and the loss of Coach Noll\’s confidence, the pressure was ultimately too much.  He went to Cleveland and played for two more seasons before right shoulder reconstruction forced him to retire.  Teammate Tunch Ilkin remembered that Rienstra as a “great guy, a true friend.”  And Donahoe pointed out that the way Rienstra was labeled was unfair.  “First pick or free-agent, I wouldn\’t call anybody who played in the NFL a failure,” Donahoe said.  “Draft positions are just projections, and that\’s why you can end up with a free-agent star.  John played a lot of games for us, and for Cleveland.  It\’s unfair for anybody to be fit with a label comparing him with maybe the best player at his position of all-time before he plays a down.  That kind of pressure is very difficult to handle.”

The kid they called \’Rhino\’ had this advice:

“Have fun. Don’t worry about what other people think or say. Realize that your football life is short, and that it goes by too fast. Don’t make more of it than it is. Stay focused.”

I think that\’d be great advice for any of the freshly drafted (2012) and free-agent players the Steelers bring into mini-camp this year.