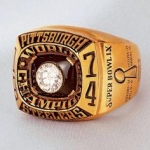 Richard “Dick” Conn, a member of the Pittsburgh Steelers 1974 team that one the organizations\’ first ever Super Bowl against the Minnesota Vikings, has had his stolen Super Bowl ring recovered according to the Georgetown Times.

Last Monday Conn reported that an unknown person had entered his residence and had stolen cash as well as his 1973 University of Georgia football ring and his 1974 Super Bowl Championship ring.

The police investigation reportedly led to the arrest on one Gregory Allen Owens, who was charged with burglary and grand larceny, after the rings were found hidden behind a water heater in his garage. The rings will be secured in an evidence lockup and then returned to Conn sometime next week according to the report.

Conn was originally signed by the Steelers as an undrafted free agent in 1974 out of Georgia and was one of five rookie free agents to make the Steelers 47 man roster out of training camp. Two other undrafted rookies, that you might recognize by name, that also made that team were safety Donnie Shell and tight end Randy Grossman.

Conn, a safety, played in 12 games for the Steelers in 1974 and also returned punts. He is listed in the gamebook as playing in Super Bowl IX against the Vikings, but only played the one season in Pittsburgh. Following his release we went on to play 5 more seasons with the New England Patriots.