It\’s nearly draft time, and this week\’s rewind article will be looking back at news that occurred in Steelers history between April 1 – 14.  This week we\’ll also be adding a little tweak to some of the news.  Some of the bad things that went into press reports ended up being good news (ultimately) for the Steelers.  It just goes to show that sometimes you can turn lemons into lemonade. 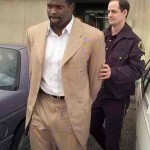 Busted in a traffic stop in March of that year, Bam Morris was in court to enter a written plea of \’not guilty\’ for drug possession.  According to the prosecutor in the case, six pounds of marijuana and one gram of cocaine were seized during the search of Morris\’ car.  Morris received probation, but violated it after the trial, and subsequently served jail time.  It ended his career with the Steelers.

Morris wasn\’t the only player to be charged with drug possession that year (at nearly the same time).  Dallas Cowboys wide receiver Michael Irvin was also indicted on felony marijuana and cocaine charges.

In 1992 and 1993 the Steelers used Barry Foster in the ground game, but brought Morris to the team by selecting him in the third round of the 1994 NFL Draft.  The result was that Foster and Morris shared rushing duties and helped the Steelers to the best record in the AFC.  Foster was gone in 1995, giving Morris more time with the ball backed by Eric Pegram.  Morris had strength and promise, out-rushing Emmitt Smith in Super Bowl XXX.  In a rare move due to Morris\’ drug activities, the Steelers made a trade with the Los Angeles Rams for a player few at that organization had high hopes in.  Jerome Bettis quickly became a mainstay at running back for the Steelers for a decade and was most recently one of the finalists to be enshrined into the NFL Hall of Fame in 2011.

Wayne Gandy started every game the previous four seasons with the St. Louis Rams.  Garnering Gandy off of free agency, the Steelers agreed to a four-year deal with the tackle for $14 million.  Will Wolford, who retired at left tackle, left an opening for new blood.  Gandy was a first-round pick out of Auburn and became one of the most expensive tackles in his free-agent class (joining Blake Brockermeyer of the Chicago Bears and Orlando Brown of the Cleveland Browns).

As reported by Bloomberg, Franco Harris and Lynn Swann (both four-time Super Bowl Champions with the Steelers) were on opposing sides as Swann ran for Governor of Pennsylvania.  A first-time candidate, Swann ran as a Republican.  Harris raised money for Ed Rendell, Swann\’s Democratic opponent and the incumbent.

A Quinnipiac University poll April 5, while placing Rendell ahead 47 percent to 37 percent, also showed his job-performance rating down to 46 percent from 51 percent in February. Other polls show the race closer, and a March IssuesPA/Pew survey had Swann 6 points ahead.

Do you have memories of Steelers history during these dates?  Feel free to share them in the comments section.