Now that the shock of David DeCastro being selected by the Pittsburgh Steelers has worn off, the question I see most asked is if the Stanford product can play left guard. Of course Mike Tomlin was asked that very question during the press conference following the pick and said, “He is a right guard. That’s what he has played at Stanford. We are going to work to put our best people on the field and he will be a candidate within that group, obviously. It was just a fun evaluation. He played right guard in Stanford’s offense and everything we would ask him to do you saw him do at Stanford, whether it was pulling or the pass-pro in the play-action game. Like Kevin said earlier, a large portion of their run-game went behind him. He made it a fun study. He is just a solid player and prospect in all areas.” The Tomlin answer was as you expect, not specific, and we need to remember that we still potentially have 9 more picks to make in this draft as well.

When you look at how the current line shakes out you have Marcus Gilbert and Willie Colon as the left and right tackles respectively. Ramon Foster, who I thought was the Steelers most consistent lineman last season, played predominantly at right guard in 2011, while Doug Legursky played a lot of left guard when not having to sub for Maurkice Pouncey at center. Legursky is best suited in my opinion as a swing lineman right now going forward so that would mean that Foster would have to flip over to the left side should right guard be the destination of DeCastro.

One thing to keep in mind is that DeCastro is a very bright technician and a move to the left side at the beginning of training camp is not out of the question. The Steelers were a heavy right handed team last season, but a lot of that had to do with the inability to run the power the left behind Max Starks and a pulling Foster. It was much easier to run the counter pike play to the right with the more mobile Legursky and Chris Kemoeatu. With Gilbert now on the left side and Colon returning from injury on the right, they should be able to become more balanced directionally regardless of where DeCastro plays.

Just so you know how right handed they were last year, the Steelers only ran left of middle 84 times in the regular season, while running right of middle 209 times according to the official NFL stats. The other 124 plays were logged as up the middle. As a quick comparison, the Kansas City Chiefs were very balanced directionally under Todd Haley. They logged 159 running plays to the right of middle and 149 to the left of middle. The other 165 were logged as being up the middle.

We will have a look at the offensive line again at the end of the draft and see if any other linemen are selected early on that could compete for the other guard spot, but I think we are in good hands wherever DeCastro lines up. I would not rule out left guard as an eventually spot. It might not be initially, but it could be in the plans down the line. Right now it just doesn\’t matter. The key thing is we drafted the Joe Thomas of guards. It will all work itself out fine. 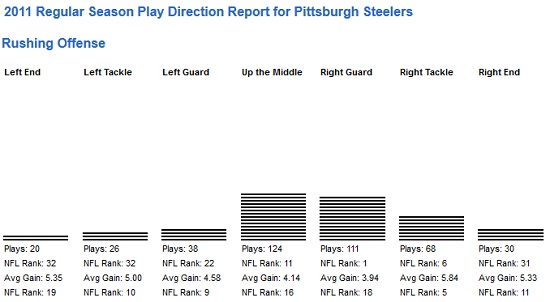 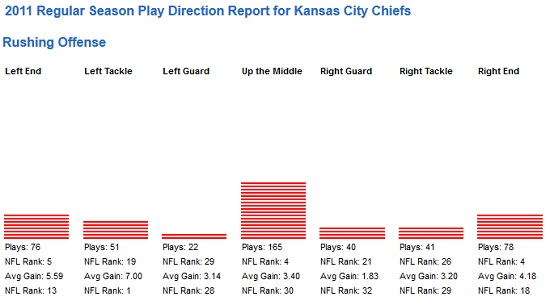