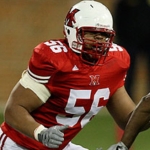 We are gearing up for the 2012 NFL draft now and will be profiling players the Pittsburgh Steelers have in for pre draft visits along with a few others along the well that match what the Steelers will likely have on their draft board. Up first is guard Brandon Brooks from Miami (Ohio) University.

Despite a nice senior season, Brooks did not receive an invite to the NFL scouting combine in late February and was the biggest snub of the offensive linemen draft hopefuls not in Indianapolis. During his career at Miami of Ohio he played both guard spots and some left tackle well. His thick build dictates he plays guard at the next level and likely best suited for right guard initially, where he played most of his senior season. Brooks really had his coming out party at the East West Shrine game where he showed he could play left guard against top competition.

The momentum continued for Brooks at his Pro Day where he measured in at 6 foot 5 inches and weighed 346 pounds. He has 32 5/8 inch arms to go along with 10 inch hands. He showed his strength by doing 32 reps of 225 on the bench and his 40 time was an unofficial 4.99 seconds. His short shuttle time of 4.53 showcased his agility and he has nice explosiveness with a 36 inch vertical to go along with an 8 foot 9 inch broad jump.

What you see in measurables translates over from tape as he explodes quickly off of the ball. He drives his man off the ball nicely and uses his thick legs to his advantage. Once he latches on to his man, he is hard to break free from. He drives down inside just as well and keeps a low base. Very rarely in 4 games worth of tape did I see him beaten to a spot. He can get to second level just as effective and is not just a straight line guy. With that being said, he does not have the agility of Maurkice Pouncey, but he is much more athletic than Ramon Foster. Brooks very rarely missed a second level target in the games I watched. I did not get to see many plays that featured him on the move, but the three I did see he maintained a nice low center of gravity and was not too upright at impact.

In pass protection he mirrors well and passes off from the guard position nicely on stunts and twist. Twice I saw him slipped under inside with bad technique as he allowed himself not to be square. He has a solid and well timed first punch and can wall off the pass rusher to either direction with his footwork. He is not heavy footed as others would have you believe, but his foot work is not elite enough to allow him to play tackle on a consistent basis either. He keeps good balance in pass protection and is not top heavy. He keeps his feet underneath him well as he mirrors.

Brooks seems very smart on the field assignment sound and one of the real questions about him is the level of talent he faced with the Redhawks. He dropped weight for his Pro Day and he will likely need to watch it at the next level. A playing weight of 340-345 would likely be ideal for him as long as he does not lose any strength.

The draft stock for Brooks come draft day will likely be late second round to late third round. His strong showing at the Shrine game combined with and excellent Pro Day has more than made up for him not being at the combine. He has made himself some money since the end of the season and would be an excellent guard for the Steelers, who have already brought him in for a pre draft visit. Brooks is likely the 4th or 5th best guard in the draft this year and that is a well deserved ranking.