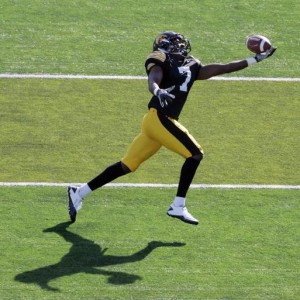 If you didn\’t listen to the most recent \’Terrible Podcast\’, you missed a great show with Dave Bryan and this week\’s guest Cecil Lammey, NFL insider for 102.3 ESPN in Denver.  When evaluating who might be a good fit for the Steelers at wide receiver in the 2012 NFL Draft, Lammey said he\’d go after Marvin McNutt.

Spending most of my life as an Iowa Hawkeyes fan, I have had an opportunity to see many of their football players up close and personal.  Last year the Steelers went after former Hawkeye defensive back Brett Greenwood.  Unfortunately, Greenwood suffered a near-death health issue shortly after being released from the Steelers*.  The \’new\’ Big Ten has some good stock in it, and the Hawkeyes have produced some great players for the NFL.  McNutt should be no different.

In November 2011, Hawkeye fans voted McNutt the “best receiver in 122 years of football” via HawkCentral.com.  This was before McNutt had a spectacular one-handed grab featured on an ESPN spotlight.  Joe Chmelka, the president of the Polk County (Iowa) I-Club said of McNutt, “When you take in all aspects of a receiver – athleticism, size, big-play capability – he\’s the best all-around wide receiver Iowa has had.”  A lot of talk was centered around his hands.  According to the Hawkeyes\’ equipment manager Greg Morris, McNutt wore gloves that are traditionally the size of linemen.  Big, soft hands in a wide receiver is a blessing.

At 6\’2″, McNutt isn\’t the tallest wide receiver to enter the NFL Draft in 2012, but he is a nice prospect that the Steelers could snatch up in the later rounds.  Lammey pointed out in the podcast that McNutt is a big-bodied receiver that squares his shoulders and comes back to the ball.  McNutt is also a strong blocker with a 77 7/8″ wingspan.

Frame, ball skills and body control enable him to be effective running slants or leaping outside the numbers.

The looming question is whether or not McNutt will have the ability to get separation from defensive backs at the NFL level.  One reason is that McNutt builds to speed.  But NFL.com\’s post-combine assessment was that he “has the size to excel at the next level and also has displayed the explosion and speed to project him to be a factor.”

Another is that McNutt is inconsistent blocking and can get jammed at the line of scrimmage.  McNutt has had difficulty running through traffic at times but he is reliable when it comes to making a needed catch.  He hesitates mainly when blocking in run support.

The biggest strength for McNutt as a prospect is that he is highly reliable.  He is willing to stretch out and drag his feet along the sidelines if it means grabbing the catch.  His open-field awareness has helped him find ways to get open.   He\’d be a possession-type receiver for Ben Roethlisberger if the Steelers were looking to pick up a quick first down as well.

McNutt\’s eight receiving touchdowns in both 2010 and 2009 tied as seventh best for a single season at Iowa.  His 16 career receiving touchdowns tied for fourth best.  McNutt was ranked sixth in the Big Ten in receiving yards per game (66.2) and ninth in receptions per game (4.1) in 2010.  He was only one of four juniors named to the 2010 Leadership Group (as he was his previous year).  A converted quarterback, McNutt switched to receiver in 2008.