Pittsburgh Steelers cornerback Ike Taylor has been dipping his toes in the television football analyst pool as of late and his latest appearance was Tuesday on NFL Total Access. I am a bit biased, but I thought Taylor did a pretty good job Tuesday in his segments, but the one thing that did catch me by surprise though was the wardrobe, or should I say jacket, that Taylor wore Tuesday. Taylor was rocking the Miami Vice look with his salmon colored jacket. I only know salmon is a color because one of my followers on Twitter (hat tip to Lauren) pointed out to me that it was not orange. DISCLAIMER: My box of Crayons never had the color salmon in it.

As you can see in the picture below, Taylor pulled it off and looked to be wearing Converse tennis shoes as well in the video I have linked to. I could be wrong with the Converse call and might be dating myself by saying that as I am by no means a fashionista. Dare I say that Ike was Swaggin? I think so. While Ike certainly had a Miami Vice look to him, it certainly was better than the Cousin Eddie blue jacket that Ben Roethlisberger has been caught in a few times. Need I even remind you of the chinchilla fur coat that Hines Ward did a post game press conference in a few years ago? Although not wardrobe related, what about Lynn Swann sitting in front of his own self portrait recently?

Last offseason Taylor said in an interview, prior to him signing his new deal, that he has always had to be a chameleon his entire life. On Tuesday we saw that Taylor indeed can change colors just like a chameleon, but I never thought one of those colors would be salmon. Perhaps I am just jealous that I could not pull it off wearing that jacket. I am also a little jealous he got to spend the day with Lindsay Rhodes as well.

Good job Ike, we are all proud of you. Here is a link to one of his segments. 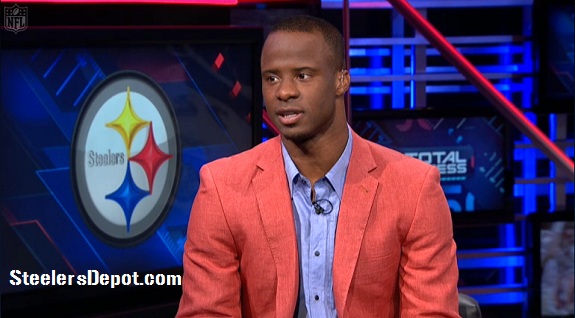