Sunday, Mark Madden, a Beaver County Times Sports correspondent wrote a piece that tore apart the Pittsburgh Steelers and players.  His premise was that young players, like Mike Wallace, aren\’t really loyal to the Steelers organization, but to fame.  His evidence?  The way that “a new breed of Steeler” are using social media site Twitter to show their lack of maturity and lack of credibility.

Twitter has become as much a part of social media as it has an untamed forum for free expression.  When Maurkice Pouncey turned to Twitter following the Steelers\’ loss to Denver in the 2011 playoffs, he opened a can of worms some people are still popping Tums over.  Pouncey\’s @ProBowler53 account has been taken down, and today it shows this: 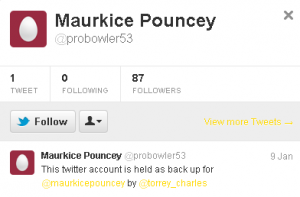 Pouncey was hammered for using a level of profanity that raised a lot of eyebrows and for promoting a rap album instead of what?  According to Madden and many others, for not showing proper respect to his team following what many felt should have been a big disappointment.  The All-Pro center was injured and didn\’t play in the game.  NFL rules prevent usage of social media, cell phones and other devices on the field.  Essentially, what Maurkice Pouncey “tweeted” was on his own free time.  However, his rant against disgruntled fans (and possibly some who were not Steelers fans), included the infamous response, “why would I be mad I’m rich play for the steelers and have a awesome life!! Are u mad loser“.  It wasn\’t much longer and Pouncey posted this message: “I like to take the time to apologize for my action. its just hard to end like that an i couldn’t help my team fight.”  Pouncey has since changed his Twitter handle to @MaurkicePouncey and recently posted, “GM, A leader is one who knows the way, goes the way,and shows the way.”  Perhaps attacking a player for personal messages left on their feed shows as much maturity as a player responding back in anger.  After all, aren\’t players as human as those who are “followers” of their feed?

With Mike Wallace under the microscope and people questioning why no team is going after him in free agency, it\’s easy for someone like Madden to point fingers – especially at Wallace\’s “tweets”.  According to Madden, Wallace is a “lame duck” who is not only undeserving of top-receiver money (in the range of Larry Fitzgerald of the Arizona Cardinals), but has an “inflated ego and arrogance.”  He sites Wallace\’s message on Twitter, “I love when haters hate.”  Last Thursday, a Twitter user sent a message to Wallace that said, “I make Movies”- your about to be makin burgers unless u sign with the Steelers soon,” to which Wallace replied, “never I got cash I will make u make em for me clown.”  With near-constant ribbing and harassment from people who simply choose to be negative towards a player, is it any surprise that the player responds in a negative way?

The question, then, becomes whether a modern social tool like Twitter, which is often used to gain a relationship socially with fans and personal friends alike (“followers”) is backfiring.  Should players be chastised more openly for their free expression than others because they are viewed as “stars”?  It is apparent that certain messages have damaged the reputation of some professional football players (see Rashard Mendenhall\’s “tweets” regarding the killing of Osama Bin Laden and his views that violence shouldn\’t be celebrated).  However, I don\’t agree with Madden when he says that the Steelers organization consider the “antics and attitudes” of players and “ban players from Twitter.”

While Twitter is a tool, I don\’t believe that messages posted on its walls define a player.  Those messages may share a side of a player that fans or others may find disturbing, appalling or even disgusting.  At other times, messages can be as uplifting as a quote, a personal response to a “follower” or an acknowledgement to someone\’s questions.  I base my definitions of players by how they play, the charitable works they do off the field, the way they treat their families and the courage they show week in and week out when dealing with adversity (especially on the playing field).  To me, Twitter is a place where anyone with something to say can do so without much thought, without using spell-check and without fear as to repercussions.  Some people, both in and out of professional football, use it well.  Others don\’t.

The Steelers aren\’t the only team who\’ve had players that speak their minds online.  They certainly won\’t be the last.

My final thoughts are this:  If I spent as much time looking for negative “tweets” by professional football players, as Madden and some people obviously do, I truly wouldn\’t have a life.

What do you think?