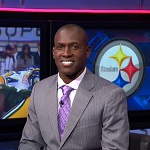 Pittsburgh Steelers wide receiver Antonio Brown made it known Friday evening on NFL Total Access that he is pretty confident that restricted free agent teammate Mike Wallace will be back with the Steelers in 2012.

Brown told Andrew Siciliano during his sit down interview that he expects Wallace to either return on his one-year tender offer or sign a long-term deal, and that the two of them will remain teammates in Pittsburgh.

Brown was quoted as saying, “I definitely expect it. I definitely look forward to him providing me help from the other side, rolling coverages — he’s a great teammate of mine.”

Siciliano asked Brown if he knew whether or not Wallace was getting any calls and Brown said, “I don\’t know, but hopefully he\’s back in black and yellow come next year. When pressed further by Siciliano if there was any doubt in his mind that Wallace would be back in Pittsburgh next year, Brown calmly answered, “No doubt in my mind, he’s coming back.”

Brown looked and acted sharp Friday night and answered all of the questions pertaining to the Steelers the the way you would expect him to,  and he did so with that smile of his that is becoming his trademark. It is not surprising as Brown had a great mentor in the recently retired Hines Ward.

When Brown was asked Friday evening what he learned from Ward over the last two years, Brown replied, “Just how to be a professional and how to go about your business, and how to come in week in and week out and improve your love for this game.”

No one questions the love Brown has for the game and I think he is spot on with his bold statement that Wallace will be a teammate of his next season.