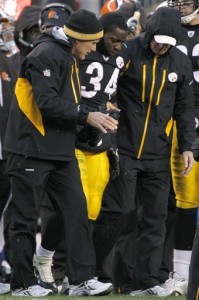 Rashard Mendenhall is facing the end of a 5-year $9.5 million contract for 2012 and a torn ACL.  His 2011 season ended in the final season game against the Cleveland Browns.  General Manager Kevin Colbert admitted that it may take Mendenhall a while to get healthy.

“Potentially Rashard Mendenhall might not be ready for camp,” said Colbert. “In my mind, I never feel good about an ACL until a year. I am not a doctor but that’s just my mindset. If he gets back before then, to me it’s a bonus. Is he a potential candidate for the PUP List? Absolutely.”

Mendenhall, questioned earlier in the season for Twitter messages about Osama bin Laden\’s death and the September 11, 2001, attacks brought all kinds of scrutiny.  It lead Steelers president Art Rooney II to make a public statement, saying, “I have not spoken with Rashard, so it is hard to explain or even comprehend what he meant with his recent Twitter comments. The entire Steelers organization is very proud of the job our military personnel have done and we can only hope this leads to our troops coming home soon.”  Eventually Mendenhall clarified his feed posts and even deleted the one about 9/11.

While Mendenhall rehabs, the Steelers are attempting to unload players who haven\’t been as  productive as they\’d like.  In 2012, Mendenhall will burden the cap by $3.4275 million.  Although that isn\’t a necessarily excessive amount of cash, it may not be worth the money to see him sit on the PUP list while other running backs step up.  Mendenhall admits that he hasn\’t set a timetable on his return to football.  He said, “I don\’t look at time as much a being 100 percent.  Whenever that happens and I am back to being me, that is what is of utmost importance before anything.”

Craig Gottschalk of the  Nice Pick Cowher website went so far as to write about Mendenhall, “He has an attitude problem, his numbers suffered this past season, his work ethic on the field was put into question…and now he is shelved.”

Truly shelved or not, Mendenhall may be facing a permanent cut.  His attitude was seriously questioned.  His numbers last season were fairly decent;  he started 15 games, had 228 attempted carries for 928 yards (a 4.1 yard-per-carry average), nine touchdowns and was 18/154 receiving.  In comparison, Issac Redman had 1 start in 16 games played, had 100 rushing attempts for 479 yards (a 4.4 yards-per-carry average), three touchdowns and was 18/78 yards receiving.  While Mendenhall\’s production seemed to slip, Redman\’s value began to go up.  Ending the season with an ACL tear didn\’t help and Mendenhall wasn\’t able to assist the Steelers in the post-season.  The Steelers have John Clay and Baron Batch who are eager to make their mark.  While Batch is coming off of his own ACL injury, he\’s ready to suit up.  Mendenhall may not even see the field at all.

The big question comes down to how willing the Steelers organization is to keep Mendenhall with the team while they try to build a solid squad and come in under the salary cap.  Restructuring contracts can only go so far.  The Steelers are facing a March 13, deadline to get that cap under control.  Meanwhile, the combines are coming and they could find a cheaper player there that is ready to put on a uniform and be healthy in training camp.

Losing great players is always a tough situation.  Fans certainly aren\’t comfortable with it.  Some are saying it would be worth losing Mendenhall after the rushing game was practically scrapped in 2011 rather than see Hines Ward completely eliminated from the team.  Two things in favor of Ward; he can block and he can still make great catches.  Mendenhall won\’t be able to do either until he\’s healthy.  That may take a year, and the Steelers seem to be running out of time.