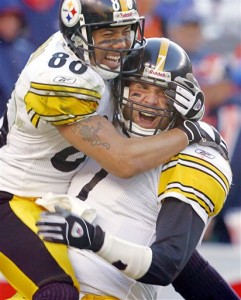 Hines Ward\’s future with the Steelers is on the decision block and his future with the team will most likely be decided on March 1. 2012, due to a roster bonus he is due. At the Super Bowl media center Thursday, Ward was adamant that he\’d be with the Steelers. It\’s true that in the last year of Bruce Arians\’ offense, Ward was devalued, but Arians is gone and that may or may not bode well for the 14-year veteran out of Georgia. Ward is scheduled to earn $4 million in the last two years of his contract, and has insisted he\’s willing to take a cut to stay with the team.

According to the Pittsburgh Post-Gazette, Ward spoke with head coach Mike Tomlin on Monday at the Steelers\’ South Side facility and also to President Art Rooney II prior to that. Ward told Ed Bouchette, “I just wanted to let them know I want to be here, I want to play.” It appears that regardless of his 1,000th career catch, his 12,083 yards receiving, 85 touchdowns and excellent blocking ability, Rooney nor Tomlin gave Ward a specific answer regarding his standing. “They really didn\’t say,” Ward responded to the question over what might have been said.

Ward has been the highest quality receiver in the history of the Steelers, but he saw his totals drop off significantly when he was relegated to the sideline during the 2011 season. Ward wouldn\’t speculate whether it was Arians\’ fault, and wasn\’t interested in discussing last season. His non-response was to say that he\’d rather say nothing than be negative.

Regardless of the salary cap pressures and the fact that Ward, who will turn 36 on Mar. 8, had off-season surgery to remove fragments of bone in his right ankle – the Steelers really could use Ward in 2012. Depending on who the new offensive coordinator becomes, Ward has the veteran experience to adapt to a new scheme and adds additional power to the rushing game should the Steelers ignore the NFL\’s new trend to have air battles every week.

The fact that Ward is one of the best blocking receivers in the entire league could be a huge benefit, especially if the Steelers buck the system and find a way to create a powerful running game during the off-season and Spring Training. With teams looking to create a very complicated passing scheme to catch up with the trend (imitating the Packers and Patriots), the Steelers, a traditionally good rushing team, could catch others off-guard by re-establishing that tradition. Ward would be key in that type of offense.

Fans, of course, would love to see Ward retire in a Steelers jersey. And not one of them would deny the fact that they love to see his smile every single week on the field.