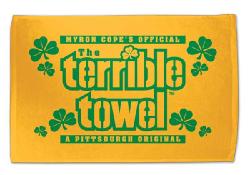 St. Patrick\’s Day falls on a Saturday this year and you can now show your Pittsburgh Steelers pride by twirling one of the new Green Shamrock Terrible Towels. The new version of the towel, made famous by the late and legendary Steelers broadcaster Myron Cope, has green lettering instead of black and also includes green shamrock 3 leaf clovers on it. As always, a portion of the proceeds from the sale of all Terrible Towels benefits the Allegheny Valley School in Pittsburgh, which is one of the largest providers of care for people with mental retardation in the state of Pennsylvania.

Cope retired from broadcasting on June 20, 2005 after 35 years calling the Steelers games. He passed away on February 27, 2008 at the age of 79, but he will always be remembered for generations to come, and every official Terrible Towel bears his name.

The Irish angle of the new Terrible Towel is not surprising as of course the Rooney family is, well, of Irish decent. But you knew that! Dan Rooney is currently the United States Ambassador to Ireland after being sworn into the position on July 1, 2009. It was on St. Patrick\’s Day in 2009 that President Barrack Obama announced he had nominated Rooney for the position. Go figure. He is however expected to step down as ambassador to Ireland and return to the Steelers organization in some capacity in 2012, although there is no specific date for that to take place.