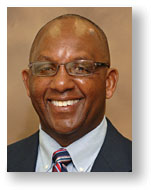 We have known for a few weeks now that former Pittsburgh Steelers center Dermontti Dawson will be inducted into the Pro Football Hall of Fame this coming summer and now we know who will be his presenter. Jory Rand reports via Twitter Saturday night that Dawson has told him that his former high school coach at Bryan Station, Steve Parker, will be his presenter at his induction in Canton, Ohio.

Mike Fields from The Lexington Herald-Leader reported a few weeks ago that Parker is the one responsible for prodding Dawson to come out for the football team his junior year. With the help of a few players on the team, Marc Logan and Cornell Burbage, who also ended up playing in the NFL, Dawson finally succumbed to the pressure and ended up playing guard and tackle for his high school in Lexington, Kentucky.

According to Fields, Dawson never played center in high school and it was University of Kentucky assistant Jake Hallum who told Dawson once he was in college that playing over the ball would be his best chance of making it in the NFL. Dawson played both center and guard for Kentucky from 1984 to 1987 under head coach Jerry Claiborne and the Steelers of course drafted Dawson in the 2nd round of the 1988 NFL draft. Dawson played 13 years in Pittsburgh and was selected to 7 Pro Bowls.