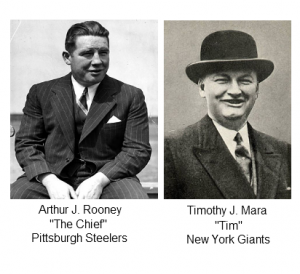 With the New York Giants in the Super Bowl this year, there will undoubtedly be some speculation regarding whether or not the Rooney family, majority owners of the Pittsburgh Steelers, will be rooting for them against the New England Patriots or not.  The reason:  The Rooneys and Maras have a connection that is steeped in family connectedness.

The relationship between Art Rooney “The Chief” and Tim Mara goes as far back as the late 1920s and early 1930s, and it didn\’t necessarily relate to football, although both men were creating franchises that would go on to produce World Championship teams.

Art Rooney was a gambling man, no doubt about it, even though his own family was reminded that it was professional football the family was focused on.  One of his favorite pastimes was betting on race horses.  In The Ward section of Pittsburgh, horse parlors and bookie hotspots weren\’t uncommon.  In fact, betting on races financed his marriage and honeymoon to Kathleen McNulty, according to Art Rooney Jr.  Horse racing was illegal in Pennsylvania, so “The Chief” often traveled out of state to enjoy his time at the track.  In a historical story, part legend and part true, Art Rooney went to the Empire City track in Yonkers, New York, with $3oo in his pocket.  As the story goes, Art turned that small amount into a whopping $21,ooo on Saturday, then continued his winning on the following Monday by traveling \’upstate\’ to the Saratoga race track.  It was never pinned down as to exactly how much Rooney made that day at Saratoga, but it was a small fortune.

According to Art Rooney Jr.\’s account in his book Ruanaidh, it was during lunch at Moore\’s Restaurant in New York, where Tim Mara, owner of the New York Giants football team and frequent bookmaker approached the table.  Art often read Mara\’s analysis of race horses.   Mara pitched a horse to Art while he sat with his wife Kass,  asking if Rooney was interested in placing a bet.  Art bet $50,000 on the horse, shocking his pregnant wife, and after the race Mara returned to report that the horse had won.  Mara was a good bookmaker, but paying off that bet would have been difficult for anyone in those days.  “The Chief” understood Mara\’s predicament.  Rooney was said to understand enough that he promised that because of Mara\’s predicament, if Kass were to have a boy, they would name the child after Mara.  Tim Rooney became the son who took charge of the family\’s horse-racing business later in life.  Tim Rooney\’s daughter, Kathleen, married Tim Mara\’s grandson Chris.  The two families became forever connected.

There are only two father-son pairs to be inducted into the Pro Football Hall of Fame in Canton, Ohio.  The first were Tim Mara and his son, Wellington.  The second were Art Rooney and his son, Dan.  Tim Mara\’s grandson, Timothy J. Mara later was part-owner of the Giants, and his other grandson John Mara is currently the Giants\’ president.  Tim Mara\’s great-granddaughters Rooney and Kate Mara are both actresses.

After Dan Rooney passed the reins to Art Rooney II, his own son, it was speculated and most likely true that the Rooneys will run the Steelers for many more generations.  Faith, respect, love and good judgement made the Rooneys and the Steelers widely respected in the NFL.  The family tree of “The Chief” and Kathleen “Kass” McNulty Rooney includes five sons, their spouses, double-digit grandchildren,  and many great-grandchildren.

Without a doubt, the Rooney family are black and gold through and through, but the connection with the Mara family is interesting enough to pose the question as to whether or not blood and bonds will lead to cheering the Giants into a Super Bowl Championship.

Helpful links to more information about the Rooneys and Maras.