The Pittsburgh Steelers had five players in the 2012 Pro Bowl game Sunday in Hawaii and all 5 made contributions. Quarterback Ben Roethlisberger threw two touchdown passes Sunday to help lead the AFC to a 59-41 win over the NFC in the annual NFL All-Star game.

In addition to the two touchdowns, Roethlisberger completed 6-of-11 passes for 181 yards as he started the game at quarterback for the AFC squad. He connected with Cincinnati Bengals wide receiver A.J. Green for a 34-yard touchdown for the AFC’s first points of the game and found Miami Dolphins wide receiver Brandon Marshall for a 74-yard touchdown on the AFC\’s next possession. It was the first of four touchdown catches on the day for Marshall, who was voted the game MVP.

Steelers wide receiver Mike Wallace had two catches for 34 yards on the opening possession for the AFC and wide receiver Antonio Brown chipped in two catches of his own for 15 yards. Brown, who was voted in as the AFC\’s kick returner had four punt returns for 115 yards and one kick return for 29 yards. Brown even got a few snaps in on defense late in the game at cornerback, but gave up a 36-yard touchdown catch to Arizona Cardinals wide receiver Larry Fitzgerald with 2:37 left in the game. Brown almost had an interception a few plays earlier but came down with the ball out of bounds. 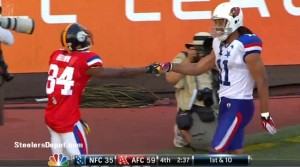 Also playing on the AFC squad Sunday were Steelers linebacker James Harrison and safety Ryan Clark and each contributed with 3 tackles each. Harrison also had a nice peel back block on an interception return. Clark limped off briefly with an undisclosed leg injury after hauling down New Orleans Saints tight end Jimmy Graham, but he returned quickly to the game.