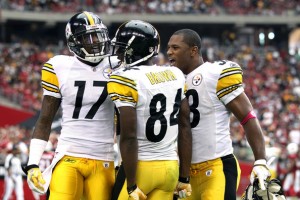 Emmanuel Sandersset the Steelers receiving world on fire his first season in the NFL by playing aggressive ball. During the pre-season alone, Sanders had 9 receptions for 149 yards and 1 touchdown in four games. His longest catch was a 22-yarder against the Carolina Panthers. During the 2010 regular season, Sanders missed weeks two through four due to injury, but came back to play the remaining 12 games. He had 28 receptions for 376 yards and two touchdowns. His longest catch was again against the Panthers; a 35-yard reception. During the 3-game post-season, Sanders had seven receptions for 91 yards.

Sanders was injured during this year\’s training camp and pre-season and sat out the first three games before coming in, once again, against Carolina to log four receptions for 60 yards. His longest went for 37 yards. It looks like Sanders has the Panthers\’ number. During the 2011 season thus far, Sanders put up 18 receptions for 243 yards before injuring his foot. He missed time during weeks nine and ten, then had the eleventh week to rest due to a bye. Not yet 100 percent, Sanders saw time during week 12 and week 13, posting 3 receptions for 31 yards. He also spent some time on special teams. The nagging foot injury and a tweaked knee has made Sanders cautious.

In a December 13th interview with 97.3 The Fan, Sanders admitted that he isn\’t willing to risk playing if his injury will be aggravated. When asked about the injury, Sanders said that his foot was “feeling good right now,” and that he is “trying to be 100 percent”. One of the most telling statements from Sanders during the radio/podcast interview was when Sanders said that when he, Antonio Brown and Mike Wallace are on the field there is “too much speed to be stopped”. That is a big statement from a 24-year-old, but so far it has proven true.

While Sanders has been recovering, Brown and Wallace have been having standout seasons. Brown has posted 55 receptions for 925 yards in the 2011 regular season. He has a 16.8 yard-per-catch average and two touchdowns. His longest play was a 79-yard touchdown catch against the Cleveland Browns during week 14. Brown also had a 60-yard punt return for a touchdown. Wallace is in his third year, but has really become a clutch target for Ben Roethlisberger. This season, Wallace has 62 receptions for 1,034 yards in 13 games. He is posting a 16.7 yard-per-catch average with eight touchdowns. His longest catch this season was a record-breaking 95-yard touchdown reception that set a new Steelers team record for the longest reception in the history of the franchise. This is the second season Wallace has gone over 1,000 yards receiving. In 2010, he had 60 receptions for 1,257 yards and 10 touchdowns.

Sanders has said that he, Brown and Wallace are the “Young Money Crew.” He went on to add that they all had different monikers related to the crew; Sanders is “Easy Money”, Wallace is “Fast Money” and Brown is “Quick Money”.

Regardless of the money talk, the three young receivers have benefited from the mentoring of Hines Ward and Jerricho Cotchery who still have great hands and are more than capable receivers. While Sanders works towards 100 percent, expect more fireworks from Brown and Wallace. The Steelers, always a team that does well selecting young players with talent, have struck gold (and black) this season.