I am already over the one game suspension that the league handed down today to Pittsburgh Steelers linebacker James Harrison for his helmet-to-helmet hit Thursday night on Cleveland Browns quarterback Colt McCoy. It is what it is and it is time to move on from it. Right now I am most concerned about the ankle injury suffered by Steelers quarterback Ben Roethlisberger in the game against Browns and the effects of it moving forward. I am also more concerned about the silly irony of the NFL moving forward in regard to injuries.

Believe it or not, I can tie the Harrison hit on McCoy, the injury suffered by Roethlisberger and the irony of the NFL all together in a nice little package for you. You see, player safety is very important to the NFL right now. Hell, Roger Goodell said so himself in a memo to the clubs last October. Here is a quote by Goodell: “One of our most important priorities is protecting our players from needless injury. In recent years, we have emphasized minimizing contact to the head and neck, especially where a defenseless player is involved. It is clear to me that further action is required to emphasize the importance of teaching safe and controlled techniques, and of playing within the rules. It is incumbent on all of us to support the rules we have in place to protect players.”

In the aforementioned memo to the clubs, the first paragraph reads: One of our highest priorities is player safety. We all know that football is a tough game that includes hard contact. But that carries with it an obligation to do all that we can to protect all players from unnecessary injury caused by dangerous techniques from those who play outside the rules. Here, here, Roger, I could not agree more that the players in the league should be protected. I hate hearing about serious injuries to any player, on any team, especially to players on my beloved Steelers.

Now I know not all of the injuries around the league are because of players playing outside the rules of the game, but should we glorify any of these injuries? Should the NFL or any of their partners benefit from any injury? Absolutely not. Well, maybe not, unless it is the NFL itself, then it is OK to do just that.

Let\’s take the Roethlisberger ankle injury the other night. You can buy a framed high quality photo from the NFL photo store of the exact moment that Roethlisberger nearly has his ankle snapped off by Browns defensive lineman Scott Paxson. Two of these sizes are even listed as a “Best Seller”. What a great Christmas gift for any Browns fan. 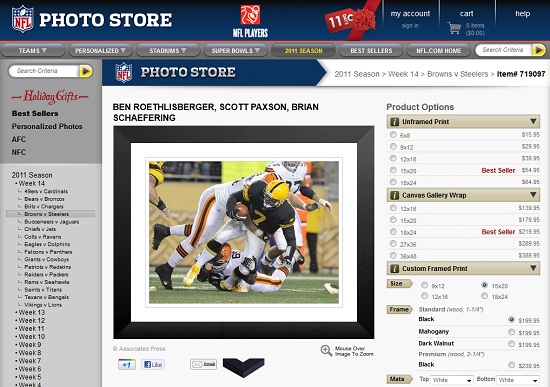 The NFL has not forgot about us Steelers fans needs at Christmas time, as we can buy a high quality photo of McCoy right after Harrison let him ride the Deebo ride. I am not positive, but I do not think that is a version of the Tim Tebow pose and I do not think all three people in the picture are praying. Isn\’t this a result photo of why Harrison was suspended? 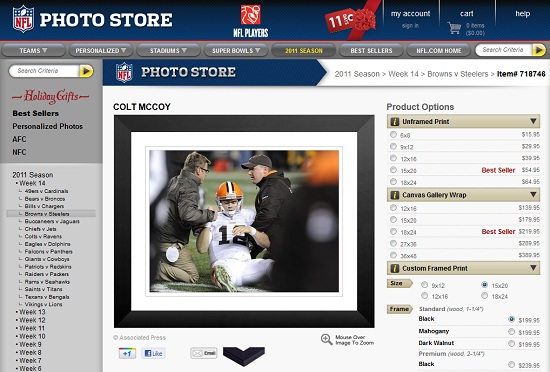 This is not the first time that the NFL has made this mistake as they also sold pictures last season of the Harrison hit on Browns receiver Mohammed Massaquoi, the Dunta Robinson hit on DeSean Jackson and the Brandon Meriweather hit on Todd Heap. NFL PR guy Greg Aiello had those photos removed from the store once they came to his attention and said he will ensure no photos of illegal plays are available again. Instead the NFL will sell you photos of injuries to players and injury aftermath as a substitute apparently.

I certainly can clearly see the difference of the these types of photos, just as clearly as Harrison saw McCoy running with the football tucked under his arm outside the pocket. Nothing says player safety in the NFL like pictures of players being injured. Hey at least none of these photos show illegal hits.

UPDATE: Seems this post hit the mark and a nerve as the two pictures have now been removed from the NFL store.