Below are the offensive personnel packages, play counts and participation chart for the Pittsburgh Steelers week 16 win Saturday afternoon against the St. Louis Rams.

Participation wise, Hines Ward saw an increase to 16 non-penalty snaps this week, 7 more than last week. 5 of those 16 came in the last 6 offensive plays of the day. Newly promoted rookie running back John Clay saw the field 3 times on Saturday and carried the ball once for his first NFL touchdown on his first NFL carry.

Starting center Doug Legursky left after just 2 plays with his left shoulder injury and Trai Essex slid over from right guard to take his place with Chris Kemoeatu playing the rest of the game at left guard. Jonathan Scott started at right tackle as Marcus Gilbert was disciplined for poor preparation and professionalism. Gilbert did see the field for 2 plays however at right tackle down at the goal-line. Scott lined up on one of those plays at fullback and the other as an extra tight end.

Personnel wise, the Steelers used 2 or more tight ends in 31 of their 50 non-penalty offensive plays. They used just 1 tight end on 19 plays. 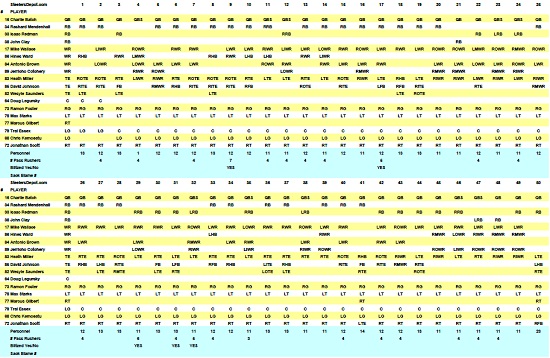