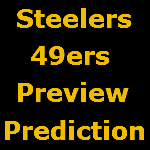 The Monday night game between the Pittsburgh Steelers and the San Francisco 49ers will be short several key players as the Steelers will be without center Maurkice Pouncey, linebacker James Harrison and possibly even quarterback Ben Roethlisberger and the 49ers look to be missing their best linebacker Patrick Willis. Should the Baltimore Ravens lose Sunday night to the San Diego Chargers, the Steelers will have a chance to take back over the lead in the AFC North with a win. The 49ers are still fighting to preserve a first round bye in the playoffs and recover from their loss last week against the Arizona Cardinals. As I do every week, here are my 7 things to look for Monday night as the Steelers look to move to 11-3 on the season.

Don\’t Get Gored – 49ers running back Frank Gore has gone five consecutive games with 88 yards or less and the 49ers are 3-2 in those games. The 5 games prior to those, Gore rushed for 107 yards or more and the 49ers won all 5 of those games. The 49ers need their running game to take the pressure of quarterback Alex Smith and they will look to establish the run early against a Steelers defense that is only giving up an average of 97 yards rushing a game this season. The Steelers also have not allowed a running back to rush for more than 57 yards since week 6 and have not allowed a 100 yard rusher since week 4. If the Steelers defense can keep Smith in 3rd and long situations, it plays way in their favor as offensively the 49ers rank 31st in the league on 3rd downs, converting just 29.21% of them on the season. It all starts by not getting Gored.

Can Worilds Do It Right – With Harrison sitting this one hit due to suspension, Jason Worilds looks to make his first start at right outside linebacker in his absence. Worilds has progressed nicely during his starts on the left side while LaMarr Woodley was sidelined and he must prove that he is versatile enough to provide the same type of effort on the opposite side. Worilds looks to finally have had the light come on after not looking so great during the preseason on the right side. That seems like a lifetime ago now and he looks to do battle with 49ers left tackle Joe Staley, who is slowly recovering from a concussion he suffered last week against the Cardinals. Staley has not worked much since suffering the injury and this will be the perfect opportunity for Worilds to dominate and get after a quarterback that has been sacked 39 times this season thus far.

Trai-ding Places – Pouncey will not play Monday night due to his ankle injury suffered last game against the Cleveland Browns, so Doug Legursky will get the start at center. That means that Trai Essex will make his first start of the season at left guard due to the poor play by Chris Kemoeatu this season. Essex was the Steelers starting right guard to open the 2010 season, but lost the job early on due to his ineffectiveness there. The Steelers love to run to the right side and they love to pull the left guard on counter lead type plays. Essex needs to show he has enough short area quickness to get to the hole and clear out the linebackers for the running backs. He must also keep the heat off of either the injured Roethlisberger or the aging Charlie Batch in pass protection as neither will be mobile regardless of who gets the start. The standard is the standard and Essex will need to live up to it.

Cold Ginn Time – 49ers wide receiver Ted Ginn Jr. is 4th in the league in punt return average (12.3 ypr) and 2nd in the league in kickoff return average (28.1 ypr) and he has taken one of each to the house for a touchdown this season. The Steelers will likely get special team ace Arnaz Battle back this week after being out with a hamstring injury for a few a few weeks, but the other ace, Curtis Brown, has been limited in practice this week with a knee injury. Brown has 14 total special teams tackles this year with 11 of them being solo. The Steelers really need Brown in this game to help neutralize the big return abilities of Ginn. The Steelers have yet to surrender a return for a touchdown this season and this is not the week to allow the first one as it could be a big difference in a game that figures to be low scoring.

Grant Us Some Big Plays – With Willis expected to be sidelined again with his hamstring injury for the 49ers, Larry Grant is expected to make his second straight start in his place at the “jack” linebacker spot. Grant plays well against the run, but is no where close to being able to drop into coverage like Willis can. This was on exhibit last week against the Cardinals as both Larry Fitzgerald and Early Doucet were able to get underneath the safeties and on top of Grant on crossing routes for big gainers. Grant is a sucker for play action, so look for either Roethlisberger or Batch to try target the middle of the field over the top of Grant. If Grant tries to cheat the run, the Steelers need to be able to run right where he should be on the play.

Return Of The Pharaoh – As mentioned earlier, Woodley will be attempting to make his second start since injuring his hamstring against the New England Patriots back in week 8. Woodley tried to return against the Cincinnati Bengals in week 10, but only got in two defensive series before leaving with a fatigued hamstring and he did not play in the last two games. His return is very timely due to the Harrison suspension and the Steelers need to get as many of good snaps out of him as they can, as he figures to be on a snap count of sorts as not to overdue it. When he leaves the game it figures that Lawrence Timmons will slide outside if the Steelers do not play a dime sub-package. Timmons specialty is inside however and the 49ers will try to run at either of the two lined up outside. Woodley was on a sack tear before going down injured and the defense sure could use a shot in the arm from the sack master. Hopefully he doesn\’t do any more damage to that hammy.

No Short Candlesticks – The 49ers lead the league in turnover differential with a plus 21 number. They thrive on the short fields and kicker David Akers leads the league with 36 field goals made out of 42 attempted. He has just missed once from 39 yards and in, so if they get in that range, he will put points on the board. The 49ers offense must be made to go on sustained drives for points, and turnovers in the Steelers own end of the field will surely result in points. If the Steelers offense is careful with the ball, they should be in this game regardless who is under the center Monday night.

Steelers 49ers Prediction – Due to all of the injuries and the way both teams play defense, this figures to be a close low scoring game. A big special teams play or a defensive touchdown could very well be the deciding factor and it will come down to who truly makes the fewer mistakes on offense and special teams. This one will be a nail biter down to the end and I think Shaun Suisham will win this one with a late 42-yard field goal.