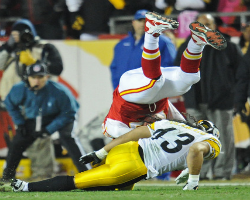 Concussions or traumatic brain injuries have always been a part of contact sports, especially the NFL.  The league created the first set of guidelines on return-to-play rules after a medical conference was held to specifically address this type of injury.  During that time, the NFL’s policy was that a player could not return to a game or practice if he lost consciousness.  That player must also be completely asymptomatic and pass neurological tests before returning to play.  The league stepped up their efforts in August of 2009, when NFL executives and lawmakers joined at a House Judiciary Committee to discuss the effects of head injuries in professional football and were criticized for not taking more action.  Due to the meeting, new guidelines were followed that year that stated a player could not return to a game or practice if he showed any signs or symptoms of a concussion, not just a loss of consciousness.  Players were required to be analyzed by independent neurologists as well as their team physician following a concussion.  In 2010, the NFL cracked down on helmet-to-helmet hits, including blindside hits to the head.  Part of the new CBA with the NFL and NFLPA included protocol that included further player-safety rules that would decrease the number of concussions; the new kickoff rules from the 35-yard-line instead of the original 30-yard-line were part of that agreement.  Players must be examined by a doctor in the locker room, not just a trainer on the bench, and they must pass stricter testing even if they return to the sidelines.  The question then, is why are concussion numbers rising instead of falling?

In a two-part study with G. Michael Cummings, a physical therapist native to Pittsburgh (who also studied sports medicine and now lives outside of Pennsylvania), an in-depth look at concussions in the NFL and the rise in numbers was conducted.

The medical truth about concussions

“Although a concussion is one of the most common and often considered a less serious type of traumatic brain injury, nearly 3.8 million sports and recreational concussions occur each year in the U.S., according to the Centers for Disease Control,” Cummings stated.  “Each person’s brain is composed of soft tissue surrounded and cushioned by spinal fluid within your skill.  When a player, especially one in the NFL, is impacted in the head hard enough to cause a concussion, their brain literally moves within the skull.  The result is that players can suffer contusions (bruises) to the brain, damage of nerves and to blood vessels.”

According to medical experts, there are three grades of concussion; each determined by the severity of the injury.  Although many of the same symptoms appear in each grade, the length of those symptoms and whether an athlete loses consciousness play a key part.

Symptoms of a concussion can include:
• Passing out and seizures
• Loss of memory
• Confusion or inability to concentrate
• Feeling light-headed
• Nausea

“Many times symptoms like light-headedness go unnoticed,” added Cummings.  “Unfortunately, there isn’t a set treatment for a concussion.  The most common is to force the athlete to rest, but some players don’t have serious symptoms right away.  If they experience long-term symptoms, they can actually develop what is known as post-concussive syndrome.  In serious cases, seizures are not uncommon.”

The facts about concussions in the NFL

On December 13, 2010, the Associated Press announced that concussions in the NFL were being reported 21 percent more as compared to the 2009 season.  According to NFL data obtained at that time by the AP, 154 concussions that occurred in practices of games were reported from the start of the preseason through the eighth week of the 2010 regular season.  Co-chairman of the NFL’s head, neck and spine medical committee at the time, Dr. Hint Batjer, said, “Based on the opinions of the trainers and the team physicians…it appears to be a cultural change.”  Unfortunately, the AP also discovered that in November 2009, thirty of 160 NFL players surveyed admitted they’d hidden effects of head injuries and concussions in order to continue playing.

During the 2010 season, several players from different teams suffered head injuries that caused them to miss games.  One of those players was Pittsburgh Steelers tight end Heath Miller. Despite efforts to step up player safety rules in both 2010 and 2011, some players’ injuries were not caught until after they had suffered damage or fell unconscious, some on the field.  Due to those incidents, the NFL has implemented (as of Thursday Nov. 23, 2011), an ‘observer’ who will sit in the press box during each game scanning the field for possible concussions that could be missed on the field by officiating crews and team trainers.  A memo was sent to all 32 teams in the NFL, including the Steelers, stating that the league wanted “to enhance the NFL’s ability to identify an on-field injury as soon as possible.”

Dr. Joseph Maroon, the team Neurosurgeon for the Pittsburgh Steelers said, “We would welcome all the additional input we could get.  It’s all about player safety and protection.”  He went on to say that the league’s latest decision shows they are taking concussions more seriously.  “They’re continually looking at how to improve things…”  It is now standard procedure for all NFL players to have a complete neurological exam in order to help team physicians, like Maroon, identify the type of head injury sustained and guard against further damage.  Another thing that is helpful to the Steelers in particular is that the center of concussion research is at the University of Pittsburgh Medical Center. 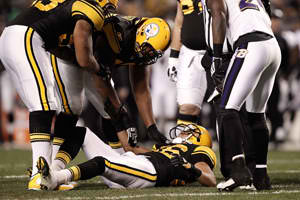 Ed Bouchette of the Post-Gazette recently came under fire when he asked head coach Mike Tomlin in a post-game press conference whether Steelers strong safety Troy Polamalu suffered a concussion during the first quarter of Pittsburgh’s game in Kansas City.  Tomlin was also criticized for his answers.  He told reporters that Polamlau had “concussion-like symptoms.”  After all the league and media hype cleared, Cummings explained why Tomlin may have been correct in his statements, regardless of the trash-talking of fans on several media sites about how ‘unimportant’ it was for the media and others to even talk about the injury.  “CLS, or concussion-like symptoms require players to sit the remainder of an NFL game regardless of whether medical staff say the player’s symptoms have dissipated.  That player must still undergo testing to confirm that he’s asymptomatic, even after the game.   Remember, there are different grades of concussions and head trauma.  Some signs are immediate (like momentary unconsciousness or a headache), but some serious signs and symptoms (like further experiences of unconsciousness and even seizures) can appear much later.  Testing is the only way to be conclusive about whether any player should return to the field, period.”

Hines Ward suffered a concussion during the second game this season against the Baltimore Ravens.  Despite fan-ranting on social media sites about Tomlin keeping him on the sidelines, it may have benefited Ward in the long run.  “The more blows these guys get to the head, the more sustained injury they can expect,” Cummings insisted.

Updating the science to protect players
Kevin Guskiewicz is a guru when it comes to preaching about lowering concussions in football. A professor and chairman in the Department of Exercise & Sport Science, an athletic trainer, a research director at the Center for the Study of Retired Athletes and the founding director of the Matthew Gfeller Sport-Related Traumatic Brain Injury Research Center, Guskiewicz understands concussions first hand.  At the age of 45, Guskiewicz won a September MacArthur Foundation fellowship.  Guskiewicz suffered a concussion during a football practice nearly thirty years ago as a safety for his high school in Latrobe, PA.  Guzkiewicz worked as an athletic trainer for the Pittsburgh Steelers more than twenty years ago, but he hasn’t forgotten the process, at the time, for determining whether players who had concussions could or should play.  He told USA Today, “It wasn’t that the Steelers were doing it wrong.  I’ve always said they probably do it better than anybody.  I think [it] was league-wide.  Teams didn’t have the right tools.”  Guskiewicz says that his research has proven that although reporting of concussions and CLS has risen, it isn’t because there are necessarily more concussions.  He credits the league for making ground-breaking rules.  “If we can measure the most common locations where a player is hit…I think we can find ways to tweak the rules to improve safety,” he added.  Guskiewicz now is chairman of an NFL subcommittee on safety equipment and rules changes that pushed for this season\’s new rule moving kickoffs up from the 30-yard line to the 35.  He is also a member of the league’s head, neck and spine committee.  Only a few years ago that committee rejected much of the science on head injuries in the NFL.  “It was very troubling…even in 2006 and 2007 the NFL was dismissing a lot of the findings that were coming out with respect to the late-life consequences of concussions.”

Consensus statement on concussion in sport – The 3rd International Conference

on concussion in sport, held in Zurich, November 2008