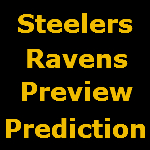 Here we go again! Steelers Ravens re-match and I do not think this game will let down the prime-time viewership. The Ravens really took it to the Steelers back in week as they ran away with a 35-7 win. The Steelers did not help their own cause in the game by turning the ball over 7 times. So many things have changed since week 1 as the defensive line has a different starter and the offensive line has 3 different pieces. The Steelers have key linebacker injuries, but also get back a few linebackers that have been out a while. Should the Steelers win this game, it will give them a firm 1 game lead in the division and an important split with the Ravens. Lose it and they will need some help to win the AFC North. As I do each and every week, here are my 7 things to watch for this week against the Ravens as the Steelers look to move to 7-2 on the season. At the bottom is my score prediction for the game and I will have my week 9 picks and predictions up for the other games later tonight.

New Worilds Order – Second year linebacker Jason Worilds looks almost certain to make his first career start Sunday night against the Ravens in place of LaMarr Woodley, who is out with a hamstring injury suffered last week against the Patriots. While it is foolish to expect Worilds to fully fill the shoes of Woodley, his ability to pressure Ravens quarterback Joe Flacco will go a long way in determining the outcome of this game. Worilds has only seen 17 snaps on defense this year on the right side due to a quad injury that has kept him sidelined since the Texans game, but he was adequate filling in for James Harrison early in the year. During those limited snaps against the Ravens back in week 1 and against the Texans in week 4, Worilds recorded one pressure and 2 stops. During his rookie season he saw 25 of his 43 snaps played against the Dolphins on the left side and showed some glimpses of his pass rushing skills that had prompted the Steelers to draft him in the 2nd round. Worilds will be going up against Michael Oher, Marshal Yanda and an occasional tight end and all of the eyes of Steeler Nation will be closely watching how he fares in this game. The Steelers will not ask him to do too much outside of holding his point against the run and getting after the quarterback. This is a litmus test that Worilds must pass.

Return Of Deebo – Harrison looks likely to return this week after missing the last 4 games following a fractured orbital bone suffered against the Texans back in week 4. His probable return is big on so many levels as it will allow Lawrence Timmons to move back inside were he is most effective. Since taking over for Harrison at right outside linebacker, Timmons has failed to record a sack and only registered 2 quarterback hits and 1 pressure in 4 games. He simply is not big enough to play outside and was below average against the run in addition as he was easily blocked more times than not. The time off has given Harrison time to also get his back stronger following the 2 offseason procedures he had done and now the only question is how good of football shape he is in. Harrison was just cleared for practice this past week. Half of Harrison though is likely better than 50% of the linebackers in the league and his return could not come at a better time.

3rd Down Average Joe – It is too easy to simply state that the Steelers need to shut down running back Ray Rice as it is a given. The Ravens offense as a whole must be put into as many 3rd down situations as possible, preferably 3rd and 6 or more as Flacco has struggled mightily on these downs and situations. Flacco has just a 43.1% completion ration this season on 3rd downs and an even lower 40.0% completion ratio when faced with 3rd and 6 or more. He relies heavily on the short passes as shown by his 65.6% completion ratio on passes thrown 1-10 yards. 64% of all passes he has thrown this year have been 10 yards or less. For comparison purposes, Ben Roethlisberger has thrown 10 yards or less on just 60% of his total attempts and has a 71.6% completion ratio on balls thrown 1-10 yards beyond the line of scrimmage. I expect the Steelers defense to once again play quite a bit of press man coverage like they did last week against the Patriots and dare Flacco to hold the ball and beat them with passes further down the field.

Madison Square Mushmouth – Ravens linebacker Terrell Suggs has every right to say that Heinz Field is his own personal Madison Square Garden until the Steelers prove it otherwise. Suggs has 6 sacks on the season and 3 of those 6 came back in week 1 against the Steelers. A few dynamics have changed since that game however as Max Starks now starts at left tackle and Marcus Gilbert has settled in nicely at right tackle. Suggs usually plays the Ravens open side-end position so that means that both Starks and Gilbert will both get to work against him. While it is crazy to think that either will shut Suggs down completely, the Steelers can neutralize him by staying balanced in the run game and having Roethlisberger get rid of the ball quick with 3 step drops. Before the week 1 game got way out of hand, the Steelers did have some success running the ball, as they had over 50 yards on their first 7 carries in that game. Once it was obvious the Steelers had to pass to get back in the game, Suggs and the rest of the Ravens defense just pinned their ears back. Starks is indeed an improvement over week 1 starter Jonathan Scott, but he will still need help throughout the game from a chipping back or stay at home tight end. Suggs can take over a game quickly and this simply can not happen if the Steelers expect to win.

Feet Don\’t Fail Us Now – The Ravens did a great job cut blocking back in week 1 and used their zone-blocking scheme to open huge lanes for Rice. Casey Hampton and Aaron Smith were knocked off of their feet several times during that game and everyone that played on the defensive line that game ended up not playing square as they game wore on because of the early cut effectiveness. Smith has been long lost for the season now and Ziggy Hood has replaced him at left defensive end. Hampton is back full strength after missing several games due to an injured shoulder in addition. With Harrison now likely to return this week, Timmons can now get back to his inside buck position with Larry Foote likely to be along side him at that mack spot. Both need to keep their feet as well and fight off the second level attack to make the tackles on Rice. 4 and 5 yard runs really make a difference and explosive runs of 20 yards or more just can\’t happen this go around. Both Rice and back-up Ricky Williams each had runs of more than 25 yards back in week 1 and combined for 12 runs of 5 yards or more in the game.

Boldin Goes To Swaggin University – Ravens wide receiver Anquan Boldin can take over a game if you let him and he spearheaded the comeback last week against the Cardinals by catching 5 balls for 117 yards in the second half. Ike Taylor spent most of week 1 covering Lee Evans as the Steelers played mostly zone coverage. Evans is out this week so he is not a concern in this game. Boldin likes to play in the slot and Taylor showed last week against the Patriots how good of a bump and run cover defensive back he was last week even in the slot against Wes Welker. The Steelers would be smart to give Taylor man responsibilities again this week on Boldin and while Ike will not shut him out, he can likely limit him to 4 catches or so on the day for modest yardage. Taylor has faced some better receivers than Boldin this year and by taking him out, it will force Flacco to rely heavily on his tight ends, who likely will be matched up one on one this week in addition. Boldin must know by the end of the night that Swaggin University has unpassable courses.

Don\’t Turnover The Win – The Steelers defense has only forced 3 turnovers through the first 8 games and have shown that you can still win games as long as they do not turnover the ball themselves. Roethlisberger was intercepted 3 times back in week 1 and the Steelers lost 4 fumbles in addition, 2 by Roethlisberger. Lose the turnover battle and they likely lose the game.

Steelers Ravens Game Prediction – The Steelers have really seemed to hit their stride now and are flying with confidence after taking down the Patriots last week. The Ravens on the other hand had to overcome the biggest deficit in franchise history last week to beat the Cardinals following a loss to the Jaguars the week before. You have to throw everything out the window when these two teams get together, but playing at Heinz Field will certainly be a small advantage. This Steelers team is a completely different one that got their ass kicked back in week 1 and I think it will show Sunday night. While they will not return the favor of the ass kicking, I see them winning by 7 after the Ravens score a late touchdown to make it look respectable on the scoreboard.