Below are the offensive personnel packages, play counts and participation chart for the Steelers week 12 Sunday night win against the Kansas City Chiefs.

Hines Ward saw 15 non-penalty play snaps versus Chiefs with 10 coming in the first 20 and 5 coming in first 8. Maurkice Pouncey saw just 18 non-penalty snaps before leaving with his stomach virus. Chris Kemoeatu then entered the game at left guard and played the rest of the way as Doug Legursky slid over to center. Emmanuel Sanders saw 28 snaps in his return from injury mostly at the expense of Jerricho Cotchery. Trai Essex saw 1 snap used as an extra tight end. This accounts for the one 14 personnel group I listed.

Personnel group wise, we saw the pony backfield 2 times with Isaac Redman and Rashard Mendenhall both lined up in the backfield together at the snap and the third time we saw Mendenhall line up outside on the left. We also saw just one non-penalty 5 receiver grouping on the night. Out of 60 plays the Steelers used two or more tight ends on 24 of 60 plays not counting the 2 victory formation plays at the end of the game. 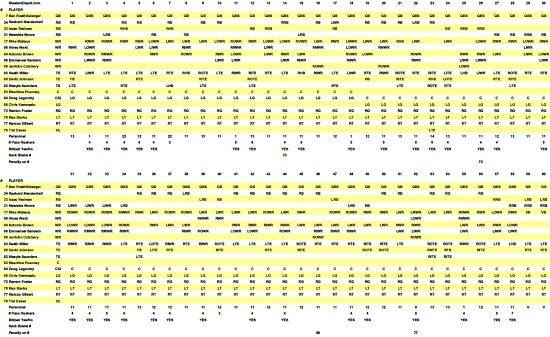