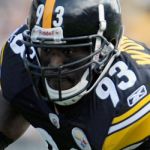 Steelers head coach Mike Tomlin was pretty non committal today on who will be the right outside linebacker this week against the Arizona Cardinals with James Harrison expected to be out once again. It has been pretty clear though in the last two games that Lawrence Timmons talents are better suited inside than outside as he is just not big enough to take on tackles or fight off tight ends or fullbacks.

Worilds has missed the last two games with a quad injury and has less than 20 snaps on defense thus far this year. He started off slow during the preseason, but the light looked like it came on towards the end. In addition, he did not look terrible in his limited snaps against the Ravens and the Texans spelling Harrison earlier this season. It still remains a very small sample size however.

Worilds is a second round pick and now is the time for the Steelers to find out if they have a future outside linebacker or a career special teams player. It does take time to fully absorb the Dick LeBeau defense, but 6 games into his sophomore season sounds about right as far being able to start contributing. If he does not get it by now, he likely never will.

What Worilds might lack as far as dropping into coverage, he should surely be able to make up in pressuring the quarterback and taking on tackles, fullbacks and tight ends against the run. Could he really be that much of a risk to start this week if healthy? I think Timmons is an amazing inside talent, but he brings nothing to the table as an edge rusher in my opinion.

The Steelers need more splash plays like Tomlin said today and Timmons is just not going to give you what Harrison can in that category on the outside. Perhaps Worilds can. Merely being able to move Timmons back to his inside spot will help the defense as Timmons is a much better than Larry Foote in tracking down ball carries and dropping into coverage.

If Tomlin accomplished anything today, it was to dangle the bone out in front of Worilds. It is up to him to attack it and force Tomlin to give it to him this week in practice. Should Worilds practice fully every day this week and not get the start outside, it will tell us that the Steelers may have missed badly on him as a 2nd rounder. We shall know the answer in just a few more days.

Here are the Tomlin quotes from today:

Will Jason Worilds be a candidate to start or will you leave Lawrence Timmons at ROLB?

“We are going to let that be determined based on how he looks during the week. As always, as these guys work and come off of injuries, we are not going to anoint or insert them into any roles whatsoever. We are going to watch them perform over the week and let them earn their roles if you will. We think that is appropriate. We did the same thing last week with Rashard Mendenhall and some others. We will do it with those guys as they work their way back in this week.”

“He has done some nice things for us. He is still a guy in development from a minute detail standpoint, and some of the things that go with that position. Obviously, the minute details oftentimes are the things that produce the splash plays that we are kind of referring to. So, we are not going to worry so much about that. What we are going to worry about with him are the details of the assignment and the preparation throughout the week, to make sure he is on his screws. Those other things will come. He is a talented player. We are not displeased with what he has done thus far, and we will expect him to continue to improve, as I am sure he will.”