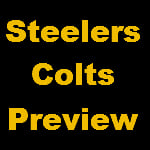 The Steelers take on the Indianapolis Colts Sunday night as they try to move to 2-1 on the young season. The Colts on the other hand are trying to avoid the 0-3 death punch with quarterback Peyton Manning still out with his neck problem. The Steelers are a 10.5 point favorite on the road against a Colts team that has numerous injuries besides Manning. As I do each and every week, here are my 7 things to watch for this week if the Steelers want to win the game along with my score prediction at the end of the keys to the game. I will have my week 3 picks and predictions up for the other games later this evening.

No Free Freeney – The scariest match-up this week is Steelers left tackle Jonathan Scott going up against Colts defensive end Dwight Freeney. Freeney actually beat Browns left tackle Joe Thomas a few times last week and Scott will be no match for him all day one-on-one. The Steelers must give Scott help in the form of a tight end or running back most of the night and they must run his way some to keep him honest. Freeney is not totally healthy coming into this game and the more they can pound on him early, the more likely they will be able to wear him down with his abdominal issue he has going on. Freeney is a game changing defensive end and can take over a game if you allow him to, but he is not great against the run.

Early Blitz – The Steelers chose not to blitz early in the game last week against the Seahawks and chose to instead to play back and force Seahawks quarterback Tarvaris Jackson to read the zone coverages and take what was given him underneath in hopes he would make a mistake. Perhaps Dick LeBeau was leery of the scrambling ability of Jackson and that is certainly understood. The defense was still able to get pressure on Jackson throughout the game regardless and the defense blitzed more later in the game when it was obvious the Seahawks had to abandon the run and pass. This week with Kerry Collins under center for the Colts, the Steelers need to force him to get the ball out quick. Collins has a tendency at times to hold the ball longer than he should and the Colts inexperienced line might be without right guard Ryan Diem this week as well. Mike Pollak would start if that indeed is the case. Veteran center Jeff Saturday is on the backside of his career, so the interior of the Colts offensive line should be able to be dominated if pressured early and often. Forcing them to keep a tight end or back in to help is one less player the Steelers will need to account for in the passing game. I expect LaMarr Woodley to have a big game this week after a relatively slow start to the season.

He Has The Whole Field In His Hands – Ben Roethlisberger has no fear of checking down if teams insist on trying to take away the deep ball from Mike Wallace. Wallace has proven he is just as deadly underneath now and no longer just a one trick pony. Like last week against the Seahawks, the middle of the field should be wide open for Roethlisberger to work as the Colts like to play the Tampa cover 2 defense. With middle linebacker Gary Brackett likely out again with a shoulder injury the duty will fall on second year middle linebacker Pat Angerer to cover the middle third of the field. The Colts defense could also be without safety Melvin Bullitt so David Caldwell could very well make his first start at free safety. There is also word that rookie Terrence Johnson may start over struggling cornerback Jacob Lacey. Wallace and Antonio Brown should be able to eat either of these two up. The Colts defense has already surrendered 7 plays in the passing game of 20 yards or more in the first two weeks. Not to be lost or forgetten in the Steelers passing game is tight end Heath Miller. Depending on how much Miller is needed in pass protection, he could have a significant role in the game. It all depends on how the Steelers offensive line holds up early against the Colts pass rush.

SpontanE Versus Weggie – Ike Taylor informed us of his new shuffleboard nickname, SpontanE, this week and Mike Tomlin accidentally called Colts wide receiver Reggie Wayne, Weggie Wayne, during his Tuesday press conference. It looks as if Spontane will get the job of covering Weggie most of Sunday night and he has done well the last two weeks against Lee Evans and Ben Obomanu as he has allowed just one catch in two games. Wayne might have lost a step over the years, but he is still deadly, especially in the redzone. Collins will likely force a ball or two or four to Wayne and Taylor must be on his screws. Another solid game by Taylor will give him a ton of confidence headed into the week 4 game against the Texans and the beastly Andre Johnson.

Time For The Turnovers – The Steelers have yet to force a turnover so far in the first two games and while it is no cause for alarm just yet, it will be if they go three straight games without one. Safety Troy Polamalu missed a gift pick-6 last week against the Seahawks and that has been perhaps the closest they have come to creating a turnover. Games are won and lost with explosive plays and turnovers and the Steelers offense has the explosive plays covered. It is time for the defense to chip in their part of the TOX stat and anything less than two turnovers against the struggling Colts will be a disappointment.

Plug The Middle – The Colts running game has been good so far this year and 14 times in 2 games they have run right up the middle for 4.86 yards per carry. The Steelers run defense tightened up last week after being gashed by the Ravens Ray Rice and Ricky Williams in week 1. The Colts will likely want to control the game by trying to run early to set up shorter and more manageable 3rd downs and to keep the heat off of Collins. Casey Hampton just needs to hold the point of attack and let the linebackers do their job. Joseph Addai is far removed from being a running back that will kill you on the outside, so the Steelers defense will want to make him bounce out there. Despite the Colts run blocking not looking solid through the first two weeks, it has been enough to get the job done. If the tandem of Addai and Delone Carter get off to a good start, it could make for an interesting game.

Shush – Despite the Colts struggling to start the season, the Lucas Oil Field crowd will be loud early for the prime time game. It gets really loud in that dome and it will stay loud the longer the Colts are in the game. The Steelers have worked on the silent count all week, but nothing quiets a crowd better than putting the home team down 14 points early. I expect Bruce Arians to be as aggressive as he can early on in attempt to put up some quick points to take the crowd right out of the game. Should this game stay close for three quarters, it certainly will test the Steelers offense ability to check out of plays all night long due to the crowd noise. This sets up the opportunity for errors and missed assignments.

Steelers Colts Game Prediction – Much like the game last week against the Seahawks, this is a game the Steelers should win. The Colts offensive line and defensive secondary are no match against the Steelers pass rush and receiving corps. The only way this game is close is if the Steelers turn the ball over multiple times and fail to execute in the redzone. They should have no problem running against the Colts defensive front in addition. This one is not close on paper and should not be close on the scoreboard. The Colts will likely score late to make it look somewhat respectable.