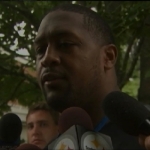 I mentioned prior to the season starting that the Steelers right guard spot could be in flux this season and already Ramon Foster is making a strong push to reclaim the spot he held for most of 2010. Foster was inactive week 1 against the Ravens, but started at left guard against the Seahawks with Chris Kemoeatu sidelined with a knee problem.

Foster had a great game against the lowly Seahawks and was the Steelers best lineman Sunday according to my weekly offensive line breakdown. Foster could indeed start at left guard again Sunday night against the Colts if Kemoeatu is still sidelined. What if Kemoeatu is ready though? Should that be the case I think the Steelers will let Doug Legursky start again at right guard, but he will be watched closely. The biggest problem he has shown thus far is his ability to win the one-on-one battles in the running game. Legursky has not been awful mind you, especially in pass protection, but the Steelers are a right handed running team and Foster could be an upgrade in that department if he continues to play like he did against the Seahawks.

Legursky is much better on the move than Foster, so that is one thing that needs to be considered if a change is to be made, however, Foster did not look bad moving around in space this past Sunday. He also impressed head coach Mike Tomlin with his ability to finish blocks.

Foster never seemed to be in the running for a starting spot this preseason as the Steelers chose to give Chris Scott, Tony Hills and Legursky most of the work at right guard to win the spot. Foster did not exactly light it up on tape during preseason as well when inserted into those games. He looked like a totally different player this past Sunday, like a guy fighting to reclaim a starting spot.

Tomlin is not one to make rash decisions, but Foster could force his hand once Kemoeatu is healthy. My biggest fear is the knee issue with Kemoeatu going forward is that it will be a week-to-week thing and I bet he hasn\’t missed his last game this season. At least if he does sit, Foster certainly seems ready to fill those shoes and the shoes of Legursky should he continue to struggle.