Steelers left tackle Jonathan Scott did not have a good game against the Colts Sunday night, but he is off the hook for the second quarter strip-sack by Dwight Freeney that ended in a Colts defensive touchdown. Scott actually did his job on the play as he was run blocking and let Freeney go up the field. The sack instead goes squarely on the shoulders of quarterback Ben Roethlisberger as he has the option to quick pass on the play if he sees a corner playing off and the safeties deep in cover 2. The key is that he has to get the ball out very quickly in a 3 step drop to avoid an ineligible player downfield penalty should he choose to pass.

Here is the quote by offensive coordinator Bruce Arians on the play courtesy of Ken Laird of Trib Live Radio.

What happened on the audible on the Dwight Freeney strip-sack last week?

“It’s not an audible that we call, it’s a thing that we do in the running game that Ben has the ability with the receivers… everybody else is running the running play. It’s not just that one play, we’ve had probably 200-yards of passing that were running plays called. If you look, everybody’s blocking a run and we’ll throw the ball to a wide receiver because of different reasons defensively. That was one that misfired. [The danger of a lineman downfield] is why it’s got to come out fast. You’ll get called for it.”

As the photos below show, Roethlisberger and Mike Wallace were either not on the same page or Roethlisberger saw a big play possibility and forgot what the assignments of his linemen were on the play. If you re-watch the play in real-time, Wallace may have had some room to run to at least for a first down if Roethlisberger hits him quickly as designed. You can take one demerit off of the board for Scott, but he still is charged with one bad, ass block. I am pretty sure that was not in the play design.

Thanks to Alan Gifford for his contribution to this post. 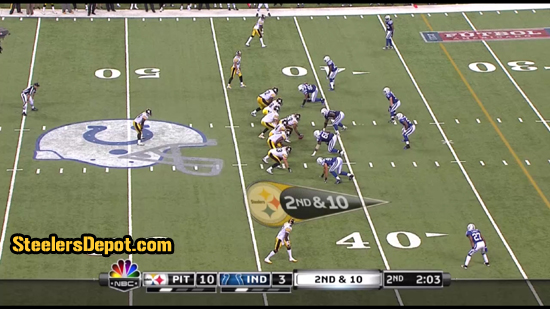 Pre snap at the Colts 42 on 2nd & 10. Mike Wallace is wide to the right with the corner stepping back about 7 yards off of the line of scrimmage. 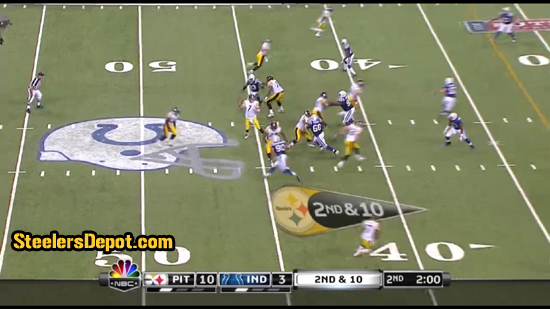 Wallace is looking for the ball as Roethlisberger looks like he is going to deliver it after 3 step drop. Chris Kemoeatu is releasing downfield to block. Heath Miller is also headed for his man to block. The ball should be out now. 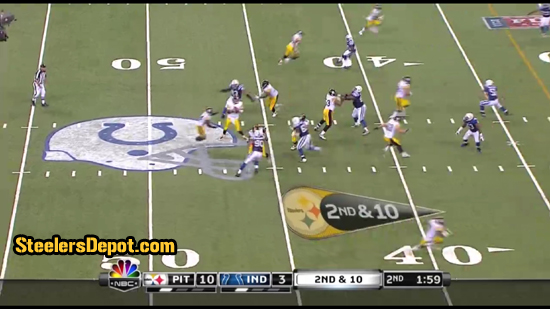 Wallace turns up field and now Kemoeatu is a good 3 yards downfield nearly. Mendenhall has his arms out for the handoff. Dwight Freeney is closing quickly. 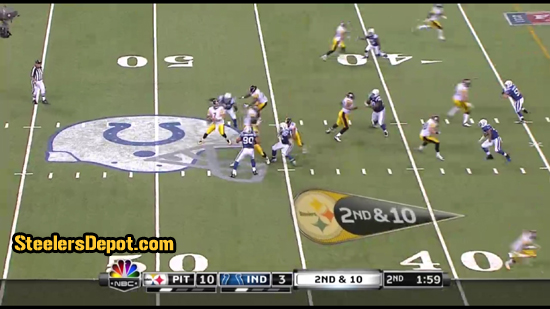 Kemoeatu is clearly off to the races here as Roethlisberger is beginning his throwing motion. Wallace is kicked into gear, but it does not matter at this point as the Steelers are surely to get flagged for an ineligible man down field. Freeney is smelling the sack. 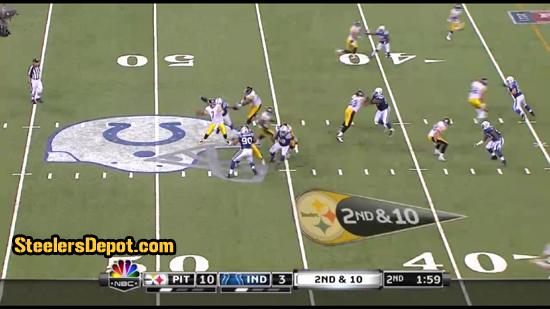 Kemoeatu is a good 5 yards past the line of scrimmage and Roethlisberger is cocked and ready to release. Freeney is about to change the game.