Ben Roethlisberger talked to the media on Tuesday and Scott Brown noted how he responded carefully when asked about the NFL\’s personal conduct policy as it relates to the recent news that Patriots defensive end Albert Haynesworth will not be suspended initially by Roger Goodell after pleading no contest to simple assault charge. Roethlisberger was also careful in criticizing rules designed to better protect quarterbacks this season.

Tim Benz of 105 The X caught up with offensive linemen Doug Legursky and Jonathan Scott on Tuesday to talk about the upcoming game against the Panthers. Legursky talked about his chance to start at right guard and Scott talked about his knee injury and if he thinks he will be able to go Thursday night.

Steelers linebacker LaMarr Woodley is gracing the cover of the regional version of the Sports Illustrated NFL Preview issue. This will certainly be one to buy and put in plastic. 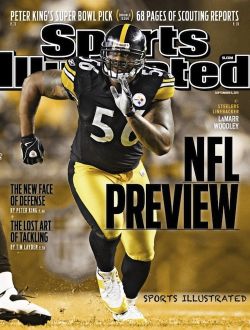 Mike Bires has a Q & A interview up that he did with rookie defensive end Cameron Heyward and asked him about his playing time he expects to receive this week and if he had time to visit with his former Ohio State coach Jim Tressel who visited the SouthSide recently.

Looking ahead to the Ravens, wide receiver Lee Evans did not take part in his second consecutive practice on Tuesday as he is still recovering from a left foot injury. Cornerback Chris Carr and center Matt Birk are also still limited as well.

Make sure to check out the gameday exclusive video below from the Steelers win against the Falcons last Saturday. It includes some very candid sideline talk between the players.