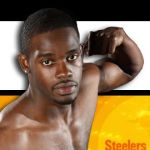 We have all heard the saying a thousand times before that you can\’t make the club in the tub. It stands to reason that a Steelers rookie cornerback that was forced to miss OTA sessions and mini camps due to the lockout and nearly all of training camp with a hamstring injury will have an even harder time proving that saying wrong. I am of course talking about rookie fourth-round draft pick Cortez Allen.

Allen was drafted out of the Citadel where football was certainly not his main priority. When the Steelers drafted him back in April they knew he would be a project as he had not had much time to hone his craft due to his school commitments. He has the talent, but he is very raw and raw players need tons of practice time to work out their kinks and that is something that Allen has not been able to do since arriving at Latrobe following the lockout. He has only taken part in a few practices and as of Saturday, he still remains sidelined with his injury.

I mentioned in my latest 53 man roster projection that I had not ruled out the possibility of him being placed on injured reserve at the start of the season and that now looks like his obvious final destination now as it seems he is destined not to play once again this Saturday against the Falcons. Having a medical red-shirt type year will not be a bad thing though for Allen. Assuming the injury is not a tear or one that will prevent him from working out for an extended period of time, Allen can use his rookie season to get into NFL football shape under the watchful eyes of the Steelers training staff. He will also be allowed to sit in team meetings and learn the complexities of the Dick LeBeau defense in the mean time.

Had Allen indeed made the 53 man roster this year, it wouldn\’t have been anything more than a contributor on special teams and that would have likely only happened after spending several weeks on the game-day inactive list. Mike Tomlin likely would have treated both he and fellow rookie corner Curtis Brown the same way he treated rookie receivers Emmanuel Sanders and Antonio Brown last year. They both would have heard the phrase, “two dogs, and one bone” quite a bit in regards to getting a helmet from week to week.

The cost of placing Allen on injured reserve is miniscule in the big picture as he only counts $473,000 against the cap this year. He and fellow 2011 draft class member Baron Batch combined will not even equal a $1 million cap hit on the IR list. Although he will not be able to practice with the team, he will be able to learn from new defensive backs coach Carnell Lake and soak up what it means to be an NFL cornerback. He can then hit the ground running next offseason in mini-camps and OTA sessions and his body should then be able to handle the rigors of practice and competing at the next level.

ETA: In tweeting with Ed Bouchette after posting this, he said that he does not think the injury will be enough to place Allen on IR and threw out the possibility of Allen being placed on the practice squad if he were not to make the 53. I included that out as an option as well in my 53 man projection following the Eagles game. Still quite a bit of time to go though before the decision needs to be made.