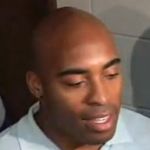 Another week and yet another story has surfaced linking former Giants running back Tiki Barber to the Steelers. The latest story by Tom Pedulla in the USA Today says Barber noted that the Steelers and Tampa Bay Buccaneers are on the short list of teams that Barber wants to sign with as he attempts to come back after being retired for the last four seasons.

Barber\’s agent, Mark Lepselter, was quoted in the article as saying, “We\’re not looking to turn this into an auction,” he says. “There are only a handful of coaches he would want to play for.” The quote is to suggest that money is not the main issue with Barber wanting to come back.

In addition to the Steelers and Buccaneers, Barber reportedly has received an offer from former Giants coach Jim Fassel to sign with the Las Vegas Locos of the United Football League for a season, but one could speculate that would be a last resort for Barber as he seems to be on a boom or bust mission back to the NFL.

Several weeks ago Barber and Lepselter were interviewed by Mike Francesa on WFAN and Lepselter said at that time that two teams had shown significant interest in Barber, but refused to name the teams. It did not take a rocket scientist to deduct that those two teams were the Steelers and Buccaneers, but it now seems that Barber has indeed confirmed that. It is no secret that twin brother Ronde Barber still plays in Tampa, where Steelers head coach Mike Tomlin coached him and the other defensive backs from 2001-2005. Tomlin reportedly is still close to Ronde and might be doing him a favor to even consider showing interest in Tiki joining the Steelers.

The Steelers might be in the market for a 3rd down, change of pace back as Mewelde Moore entered the offseason as an unrestricted free agent and there have been no real signs that they are interested in re-signing him up to this point. The Steelers also drafted running back Baron Batch in the 7th round of the 2011 draft to compete for the role, but it seems that they want some veteran presence to compete for the spot in training camp.

As much as I am against the signing of Barber, it certainly seems like it is becoming more of a reality that he could indeed end up in the black and gold. As soon as the lockout is over, the answer ought to come pretty quick.