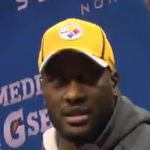 Steelers linebacker James Harrison is back in the news today after an interview with Paul Solotaroff for the August issue of Men\’s Journal magazine that is about to hit the newsstands this week. Harrison does not hold back in the interview that was conducted back in mid-May according to reports.

Harrison called NFL Commissioner Roger Goodell a “crook,” “devil” and “stupid,” among several other derogatory names. Harrison did not stop there as he also took shots at other NFL execs, former Patriots Rodney Harrison and Tedy Bruschi, Texans linebacker Brian Cushing and even teammates Rashard Mendenhall and Ben Roethlisberger for their play in the Super Bowl loss to the Packers. Harrison also questioned whether a black player is punished more for a hard hit on a white player than the opposite.

Harrison also made some comments about what he believes are the league’s lame attempts to increase safety. He explains how non-guaranteed contracts make players want to hit high more often, because in the short term, a torn up knee is more costly to a player than a concussion. Harrison goes on to suggests that the way to prevent head injuries is to shorten the season to 14 games, start offseason workouts later and trim the length of training camp so that players are not banging heads so much in August.

Being as the interview seems to be conducted back in May, it is close to the same time that the owners passed the new rule on defenseless players. At that time, it was viewed as the Harrison rule by most of Steeler Nation. Harrison does not give out many interviews and Solotaroff must have really loosened him up to say the things he said. The Goodell comments, although not advised, are not very surprising. The comments about his teammates are though and I expect Harrison will be asked to answer to these and all the vocal comments he made as soon as he reports to training camp. He his however a very intimidation person to interview by all reports, so I bet the media are very careful of how they phrase their questions.

Harrison said back in a late May interview with NFL Live that he is not out there trying to hurt or maim anyone as Jamie Dukes suggested earlier that week on NFL Total Access. About his criticism of the rules changes, Harrison said he was unemployed at that time due to the lockout and that they can not fine him for anything. Despite the rules changes, Harrison told Mike Hill in that on-air interview that it will not affect the way he plays the game going forward.

We will see where these latest comments lead to and I doubt Goodell punishes Harrison for his comments, but you have to wonder if they will be in the back of the head of the commissioner should Harrison have another hit reviewed for a possible fine or suspension. As far as his comments about his teammates, I am sure they will work that out behind closed doors, but he likely will not be invited to the upcoming Roethlisberger wedding. Not that Deebo would go anyways.