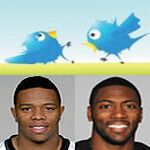 Steelers safety Ryan Clark joined 93.7 The Fan this morning to discuss his recent beef with Ravens running back Ray Rice on Twitter as well as the early Saturday morning DUI charge of wide receiver Hines Ward. Clark commented that the Rice remarks did not bother him in the sense that they were extremely bad as much as they were disrespectful. Clark said, “As players we should all be a fraternity of brothers and what I mean by that is, if you have nothing good to say about something, then why comment on it.” Clark said it took on a life of his own after he thanked Rice for weighing in on the Ward DUI and that the rest of the comments Rice had about “finding him”, were just “whatever” to him and that he really just tried to take the high road from there on. The biggest thing according to Clark was that people make mistakes and to be judged by your peers or to judge one of your peers is not really your job and it is not why they are all here. Clark thought it was tasteless of Rice to do so.

When asked about the Ravens rivalry and if this recent incident is a continuation of it building, Clark said it would not have mattered who made a snide remark or comment about Ward, his reaction would have been the same. He said he does not lose sleep over them and that he is just excited to play football, after both the game and his life were almost taken from him a few years back. Clark said the Ravens are just another football team that they play very often in his eyes.

Clark was next asked about what he will say to Ward the next time he talks to him and he said, “Nothing, nothing at all. I mean he is an adult and he is what I believe is a very good man and I don’t know the details of the night with so many things coming out, so if he wouldn’t come up to me and bring up the subject, I wouldn’t broach it at all. I think that the one thing that I know I don’t like for people to do, is sometimes when you know you made a mistake, nobody feels worse about it than you do. When you know you put yourself in a position of either right or wrong, nobody understands it more than you do. So he doesn’t need me to come up to him and talk about the situation, so, I think I did what I had to do in a situation where I felt like someone was disrespecting him or someone was kind of poking their nose into his business when it was unnecessary, but as far as that, you know, it\’s over, its behind us.” Clark went on to say people and the media make a bigger deal about the comments on Twitter than they should.

Clark gave a brief update on the status of the lockout and said there were still quite a few things to hammer out and it is not to say that the two sides are not close. He says the rookie wage scale is not the only thing the two sides need to work out though. Clark thinks a deal will get done and that there will be football, but he did not want to put a time frame on when there will be an agreement.

Clark said he is currently out in Arizona training at Performance Enhancement Professionals as he continues to get himself into shape and ready to play whenever the lockout is over.