Pete Prisco of CBSSports.com continued his campaign against Steelers safety Troy Polamalu on Tuesday in an attempt to justify his article a few weeks back that stated Polamalu is the most overrated player in the league. Prisco appeared as a guest on Trib Live Radio on Tuesday and host John Harris asked him about his overrated Polamalu statement. Listen to the interview here.

Early on in the interview Prisco decides he wants to act like he knows his football and make a case of how Troy gambles and gets away with. Prisco said, “I\’ll go back to the opener last year against Atlanta. He made the big interception and it was a great play. Matt Ryan made an awful play, because Troy left the guy wide open in the middle of the field that would have been maybe a touchdown, at bare minimum a huge play that would have set up the winning points. So he gambled and made the play.”

Really Pete? He gambled and made the play by leaving a guy wide open in the middle of the field? Are you sure it was not a great defensive scheme by defensive coordinator Dick LeBeau and the keen awareness of Troy to do his job that led to the great interception?

Doug Farrar of Yahoo Sports did a good job of breaking this play down back in February and pretty much nails it. It is a nickel personnel package with William Gay on the field as the nickel and a Cover-2 scheme look with both of the safeties in the middle of the field and about 18 yards deep. Both left cornerback Bryant McFadden and right cornerback Ike Taylor are a good 10 yards off the line of scrimmage and the Falcons are using an 11 personnel package as they have one running back and one tight end in the game along with three receivers. As Farrar diagrammed out, McFadden and Polamalu essentially switch roles as McFadden works towards the inside to give over the top coverage on Falcons receiver Harry Douglas as Gay has underneath responsibilities on Douglas. You can see in the video that Polamalu breaks almost immediately to assume his coverage on Falcons receiver Roddy White and Ryan never picks this up as he is confused by the coverage and scheme of the great LeBeau.

If you look the still frames below from the coach’s tape, you will see again there is no gamble at all by Polamalu. The first picture is right before the ball is snapped and you can clearly see the Cover-2 look. The next 3 pictures are 3 different angles from the same point in time, right before Ryan delivers the ball. In all 3 shots you can see that Gay is breaking for the underneath route to Douglas as his responsibility for the tight end is passed off to linebacker James Farrior, who has the underneath middle zone responsibility. McFadden is working from his left corner spot to assume the deep help on Douglas and free safety Ryan Clark has over the top, center field responsibilities. Taylor has right side over the top duty, while linebacker Lawrence Timmons drops for underneath support. You can see Polamalu even slows up just a bit before finally breaking on the route in the video, just in case White gives a double move. Once he recognizes the ball is released, he jumps the route for the interception. 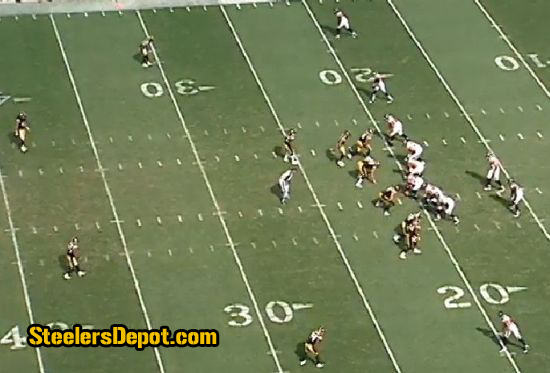 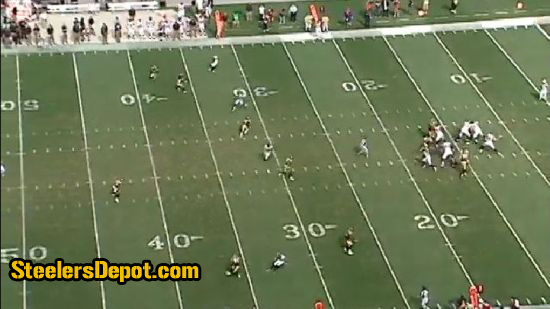 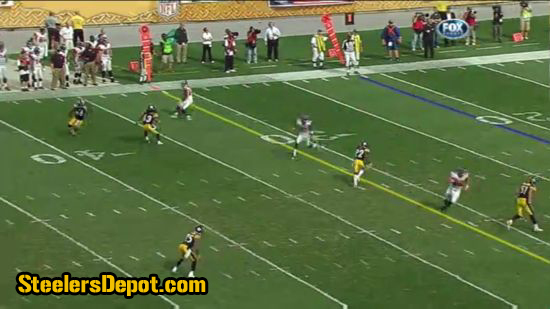 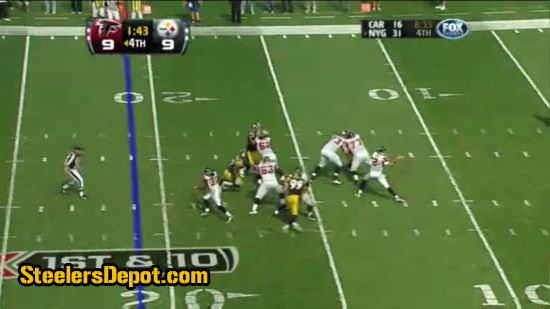 A gamble, Pete? I think not. This is just Prisco continuing to watch games via a stat sheet and not understanding the game of football and more importantly, not understanding Steelers football and the roll Polamalu plays in it. The Steelers defense is one that is predicated on confusing the quarterback and not giving up the big play. The Cover-2 and Cover-3 the Steelers play along with the LeBeau zone blitz is very complex. Something Prisco simply does not understand. The more Prisco opens his mouth on Polamalu, the more it shows that he is merely a talking head and not a student of the game. He also has some sort of bias against Polamalu and it shows the more he talks about him. I will be here to continue to point that out and this post merely used one statement from the Prisco interview yesterday. The only part of that whole statement Prisco made that was true, was when he said, “He made the big interception and it was a great play.” The rest is hogwash.