Desperate times calls for desperate measures. The Steelers have been ravaged by injuries at the quarterback position and Mike Tomlin has the team doctors hard at work Frankensteining us a starting quarterback for the final 2 games before the return of Ben Roethlisberger following the bye week.

After all of the operations this week, the new 3 man QB monster will be named, BaftWixon. This QB will feature the legs and feet of Dennis Dixon which were cloned prior to the meniscus tear this week. The legs will enable complete escapability for the monster QB from any collapsed pocket. The torso of Baftwixon will feature the arms and heart of Byron Leftwich. This QB will be able to throw the football to Mike Wallace and hit him in full stride. The throwing arm will have the precision of a freaking laser beam. A freaking laser beam I said. The heart will be one that would rival the one the Tinman got in the Wizard of Oz. The head, eyes and brains of BaftWixon will be that of Charlie Batch. Batch has seen it all in his years under center and most see him as a future quarterback coach. He can read defenses and perform the actions with his new body that his old fragile body would never let him do for several years.

Baftwixon will be programed by the Rooney\’s to not run any running play featuring Mewelde Moore. It also will override any 3rd and short bootleg rollouts called by Bruce Arians. Baftwixon is also impervious to any Terry Bradshaw comments and Mike Florio conspiracy theories bounce right off of him like rubber bullets. 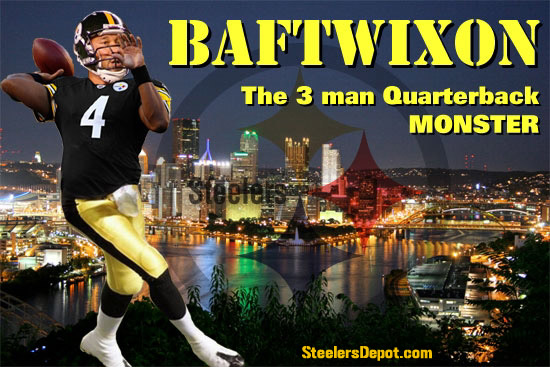 Hat tip: Special thanks to Steelers Depot regular reader Dan Piotrowski for the graphic work of Baftwixon. You can visit Dan\’s website at danpiotrowski.com and hire him out and you can also follow him on Twitter at @danpio1217. Tell him Steelers Depot refered you.