Always tough to find something good to write about on gamedays of the preseason, but I thought I would make a point to cover undrafted free agent Dorian Brooks today. I did not add this to the 10 things to watch against the Giants as it\’s level of importance is way down the scale and it might not even come to fruition. 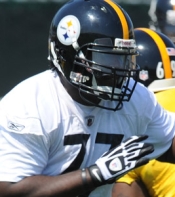 First, who is Dorian Brooks? Brooks is the Steelers undrafted free agent from James Madison that made the transition in college from a defensive lineman to an offensive lineman after his freshman season. He is a bit undersized, but ended up making thirty-seven consecutive starts at guard after the position switch. At the 2010 NFL combine, Brooks impressed with his quickness and turned in a 40 time of just over 5 seconds and ranked sixth at his position in the 20-yard shuttle time. The knock on his size and lack of exposure at a small school likely contributed to him going undrafted in April.

Second, why should you care? Brooks received 6 snaps last Saturday night at right guard versus the Lions and word is he started training at center this past week as well. While no official word has surfaced about his playing time or position this week, he could get some late mop up looks at center tonight versus the Giants. If indeed it does happen this week, it could signal the Steelers think enough about him to eventually sign him to the practice squad. It could also be a sign that Maurkice Pouncey is indeed about to run veteran Justin Hartwig off of the roster as well.

The Steelers like players with position flexibility and quickness and Brooks seems to be heading in the right direction in both categories. Fellow undrafted teammate Doug Legursky is a prime role model for Brooks as Legursky took the same path in the early days of his Steelers career. If indeed Hartwig is made expendable, Legursky will be a swing interior lineman on the roster and back up Pouncey at center. A practice squad spot would enable Brooks time to hone his craft and technique at both center and guard and he could be the heir to the swing interior lineman spot now held by Legursky in a few years. So in closing, keep your eyes peeled late in tonight\’s game for #77 on the offensive side of the ball at center. It could be telling move of the things to come for the Steelers. If it does not happen, at least you know who Dorian Brooks is.