The first preseason game against Detroit is rapidly approaching and training camp is already in its 12th day. One of the biggest disappointments thus far in training camp has been the news on second round pick Jason Worilds. Worilds has missed valuable time trying to shake a hamstring injury and is having to learn the complex Dick LeBeau defense by merely taking mostly mental reps. Worilds is already getting knocks in the local papers and is probably pushing himself way too hard to overcome both the injury and the early naysayers. 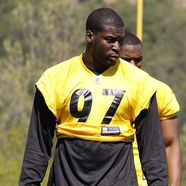 Before I go any further, let me state I was not a fan of the Steelers selecting him in the second round as I felt he could of been had at least a round later and we all knew he would be a player that would take time to develop. To label Worilds the next Alonzo Jackson as he is being labeled on many forums is very premature at this point and uncalled for at this early juncture. Immediately after he was selected in the draft, linebackers coach Keith Butler said, “We think this kid could come in and help us in terms of depth and help us on special teams as he learns the defense. As you know, since I’ve been here we’ve never had a rookie linebacker start in this system. We like to groom them for a couple years and let them get their feet underneath them. The guys that have been successful here have always been good on special teams for us the first couple years they’ve been here. And we think this guy will be in that mode.” That should be all you need to know about Worilds in year one as he has been worked on the right side, which is not his natural side he played at Virginia Tech. Worilds is also termed a speed guy and a speed guy hampered by a hamstring injury needs to concentrate on getting healthy first.

Jackson , who was drafted in the 2nd round in 2003, was merely a speed rush guy and lacked strength at the point of attack. He also never good dropping into coverage. Coming out of college, Worilds, while not great, is already twice as good as Jackson was in college at dropping. Jackson was also a bit of a head case, while Worilds seems to be “all there” upstairs. I think this why the Steelers took him where they did knowing that the comparisons to Jackson would likely be a concern initially. The biggest thing Worilds needs to do is to get healthy and I doubt he will play Saturday versus the Lions, but hopefully can get a full week of practice in prior to the second preseason game versus the Giants. Where Worilds can help initially in year one is on special teams. Until he gets his speed back, that is out the question. He was not slated to be anything more than that this year and anything he contributes above that in 2010 is a plus. Let us hold off passing judgment and comparing him to Jackson until this same time next year. If he does not make the noticeable jump by then, it might be time to worry. Worilds is surrounded by great talent and coaching along with a full calender year ahead of him to live up to his draft status. Right now, time is on his side just like Butler said. Right now he just needs to get his feet underneath him or in his case, his hamstring.