It is hard to imagine that the only active starting cornerback in the NFL to win two Super Bowls would finish his career in a uniform other than a Steelers one, but that is exactly what likely will happen with Ike Taylor. Taylor is entering the final year of a $23.75 million contract extension he signed in 2006 and regardless of his play in 2010, just will not be a priority next offseason for the Steelers. It is yet to be seen what type of tag if any will be included in a new NFL CBA, but the Steelers would likely not use it on Ike anyway. 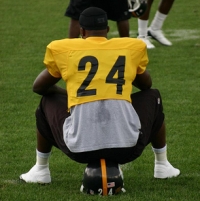 A healthy, productive season by “Face Me Ike” will price him well out of the ball park for the Steelers as veteran free agent corners tend to strike it big in free agency over the several past seasons. There is no reason to expect that Taylor will not “get his” as they like to say. In his 7 years with the Steelers, Taylor has 9 interceptions, 88 passes defended and 415 tackles. He also set a Steelers franchise record by recording interceptions in 3 consecutive playoff games and on top of everything else, he has never missed a game due to an injury.

As I mentioned in the training camp preview of the Steelers cornerbacks, the move to youth at cornerback is in full swing for the Steelers. They drafted Joe Burnett and Keenan Lewis in 2009 and hope to have found Taylor\’s future replacement at right cornerback in the form of 2010 5th round draft pick Crezdon Butler out of Clemson. Butler has impressed in the OTA sessions and will be scrutinized closely in training camp as he already has been receiving occasional reps with the first team defense when Ike needs a breather, according to reports.

Ike has a great relationship with the Steelers and even restructured his contract the previous two offseasons to help free up money for other players, but in the end this is a business. The Steelers have to try to find a way to lock up linebacker LaMarr Woodley as soon as possible and need to start over hauling a veteran, aging defense. Taylor will be the first player to suffer because of this new move to youth. While there are several unknown factors about how a new CBA or salary cap will look like, it is hard to imagine that either will help Taylor end his career as a Steeler.

Taylor was major cog in the Steelers two recent championships and it will be so hard to see him play elsewhere. Like it or not, it is a reality Steeler Nation needs to face. The only one that will be glad to see him go, will be Chad Ochocinco. Face it, Ike never kissed that baby!