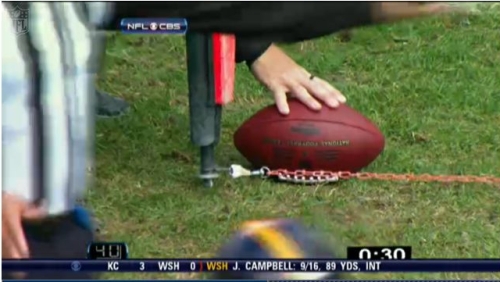 First down measurement picture versus Browns!

Walt Anderson – Re: fourth down measurement

Question: Why it was a first down
Walt Anderson: “The ball has to penetrate the plane of the stake. When we set the ball up ready to measure and we bring the chains out, the chains are set beside the football, they\’re not put down on top of the football. So I get on the side and I\’m looking straight in at that angle. So when the stakes go down I\’m sighting in between the nose of the football and the stake. So if the nose of the ball touches the stake then it\’s a first down. It\’s kind of like a football touching the plane of the goal line. But we don\’t actually put the stake up against the nose of the ball because of the way the ball is shaped. The chains and the stake are laid beside…so it kind of depends on the angle you might be looking at it from.”

Question: Picture showed ball short of the stick
Walt Anderson: “It depends on which angle you might be looking. I\’m looking from straight on so I guess it\’s conceivable that\’s why I don\’t get it back at an angle because it can be deceptive because there\’s a little bit of a distance probably in the neighborhood of five or six inches between the actual point of the football and where the stake actually sets on the ground. If you shot at an angle maybe from back behind the ball it might look like it\’s short. If you shot at angle the other side, it might actually look like it\’s further in advance of the stake then what it actually.”

Question: Where he was measuring the nose of the ball was at the stake?
Walt Anderson: “It touched the plane of the stake because that\’s what I\’m looking at.”

Question: The correct call was made and you stand by it?
Walt Anderson: “Yes”